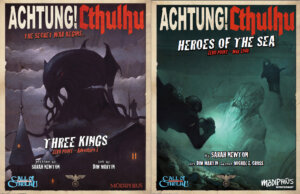 Acthung Cthulhu is a setting for Call of Cthulhu – there are also editions for Savage Worlds and Trail of Cthulhu – which take your team of adventurers into the Lovecraft Mythos during the Second World War. There are plenty of thrills and chills to be had as you battle occult conspiracies, terrifying Nazi war machines, and an ancient evil so powerful that it threatens to tear the world apart!

Currently there are two standalone adventures, which can also be utilized as the first two chapters of the Zero Point campaign, available as downloads: Three Kings and Heroes of the Sea. 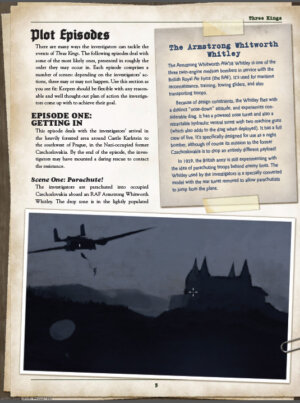 In the first adventure – Three Kings – the investigators are operatives of Section D, a branch of the British Secret Intelligence Service (MI-6 anyone), who are air dropped into Czechoslovakia to delve into the mysterious goings on at Castle Karlstein located 25 miles outside Prague. As in most tales of terror, what the investigators think is the reasoning for their assignment of establishing contact with the trio of resistance leaders known as the Three Kings will soon take a backseat to the horrific goings on of an evil mad doctor.

When I review roleplaying game adventures I like to keep the spoilers to a minimum so I won’t lay out the story and ruin it by those who want to pick this up. Suffice to say this isn’t just a tale of cloak and dagger espionage. It’s important to note Three Kings is probably going to have quite a bit more combat for most groups than what they’d normally find in a CofC adventure. This is more along the lines of two fisted action, with some Lovecraft flavor, than an out and out Mythos scenario. Plus, I’m not getting the feeling that players will find the scenario scary in the least bit without a lot of work on the part of the Keeper.

Plus, some of the adversaries the players will face have practically been done to death to say the least…

The adventure isn’t anything spectacular in itself although there’s a decent enough twist near the end. Five episodes make up the supplement with additional appendices including stats for NPCs, some new rules, and the mission briefing the players will receive. The production is well done and, as a first effort from Modiphius, comes across better than what I’ve seen from a lot of other companies.

All in all though, Three Kings just doesn’t feel like a traditional Call of Cthulhu adventure. Or maybe I should say not an adventure a traditional group of CofC players will really get into. There’s too much emphasis on violence, not enough actual investigation, and the final confrontation (as well as the recommended method for tackling the final big baddie) just doesn’t ring true with what Call of Cthulhu is all about. Does this make Three Kings a bad supplement? No… Just not a great Call of Cthulhu tale or one ill-suited for the typical CofC Keeper and players. 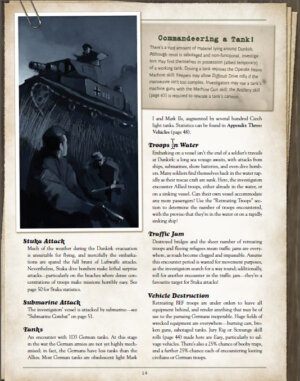 The follow up to Three Kings is Heroes of the Sea, also written by Sarah Newton. Once again the intrepid group of Section D investigators are sent on a seemingly traditional espionage mission only to find themselves not only caught in the midst of the Dunkirk evacuation but a diabolical Mythos plot as well. I have to say I enjoyed this scenario quite a lot more than Three Kings. Maybe it’s because the stakes are higher, or there’s simply more going on, or the trappings for more actual investigation is taking place. Suffice to say the adventurers will have their hands pretty full in this tale. I do want to mention though, just as in Three Kings, one of the suggested methods for success during the finale is a big letdown – and actually anticlimactic in my book – but any clever Keeper will simply discard the idea outright.

The adventure is broken into five episodes again a good deal of the book is devoted to new skills, new spells, vehicles, handouts and so forth. The production quality is even better than Three Kings and that’s saying something; this really will look good once the printed edition is collected after all the Zero Point adventures are completed.

Whether Three Kings or Heroes of the Sea are worth picking up is going to have a lot to do with the kind of roleplaying group you have. If your players love to take on the roles of gumshoes and occult book dealers these two tales are more likely than not going to be up their alley; there’s just too much emphasis on combat for me to imagine players who love to peel back layer after eerie layer of terrible secrets before the real horror is brought to the fore digging this kind of gaming. That said, if you have a group who plays more of a two fisted pulp style of game or would like to then the first two releases in the Zero Point campaign should be just what they’re looking for. Let’s be honest, the setting is WWII so you have to realize there’s going to be a lot of combat before you would even think to take a peek at these scenarios.

TGG REVIEW
6.5 TGG SCORE
0 VISITORS' SCORE (0 votes)
Summary
Both Three Kings and Heroes of the Sea are okay adventures for Call of Cthulhu but certainly not very noteworthy. There's tons of combat (I get it, it is WWII) and not a whole lot of investigating. Certainly not the worst CofC adventures I've ever seen though!
REVIEW SCORE
What people say... Leave your rating
Sort by: