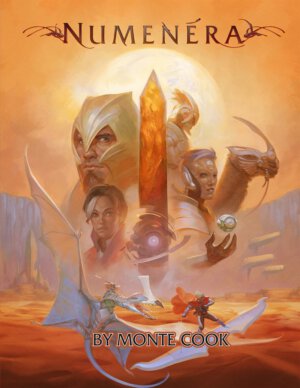 Numenera is Monte Cook’s vision of an idea that he had been toying with for his entire career. The setting of the roleplaying game is the first thing that will catch the attention of many people while the designer’s pedigree will draw in plenty more. Numenera’s system is something which will feel familiar to long time roleplayers but come across as fresh to those new to the hobby. Set a billion years in the future, the Earth has seen the rise and fall of civilization eight times before and now the player characters exist in what’s known as the Ninth World.

The world of Numenera features plenty of options for exploration and discovery as players will encounter remnants of the past which provide mysterious, wonderful, or deadly adventure full of excitement and rewards. I will mention as interesting as this future setting may be it’s far from an original concept as I can easily think of quite a few fantasy series in the same vein; Michael Moorcock’s Dorian Hawkmoon novels leap immediately to mind, with a civilization built upon the remains of others before containing ancient and arcane wonders waiting to be discovered. Although Numenera doesn’t feature the most original of settings there’s still tons of goodness for players to uncover.

Upon your first read through the over 400 pages you’ll find sections are well organized and written effectively. There are a lot of sidebars filled with additional information which will come in handy. The artwork is solid for the most part with some being exceptionally good. You will find quite a bit of the art reused throughout the book but at least the art is tied into what you may happen to reading about on a given page. 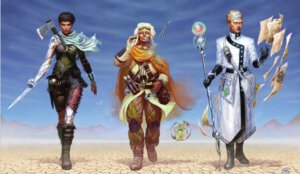 The game system may remind some people of the d20 titles of old – a d20 is the only die you’ll use – yet many of the mechanics from those games have been done away with; the focus here is on simplicity and jumping into the action as quickly as possible. The gist of action resolution is rolling against a Task Difficulty multiplied by three. This creates a range of numbers from three through thirty which players must roll higher than with that d20. Obviously, the more difficult the challenge faced the higher the roll needed to succeed. The Task Difficulty can be lowered by various factors such as skills, powers, equipment, and players expending what’s known as Effort.

One aspect of the Numenera system which might not go over well with GMs is the fact only the players roll dice. That’s right. The GM never rolls the bones. While I don’t have an issue with this I’m sure there are a lot of folks running games who dig tossing around the old dice and won’t keen on simply sitting back and creating Task Difficulty numbers.

While the action resolution is pretty easy to apply I’ll mention it does take some flavor out of the proceedings, especially when you’re engaged in combat. Numbers required to hit an enemy, and dodge attacks, are based on enemy’s level (shades of THAC0?) and tend to remain stagnant as does the amount of damage a weapon will deliver. This tends to make combat play out a bit less exciting than I’d prefer. It’s not a horrible system of combat but just kind of bland.

Character creation is a fairly painless process and boils down to putting together an alter ego based upon one of three archtypes. I use the word archtype because although there are only three “classes” they can be portrayed quite broadly. Players can choose from the Glaive (fighter), Nano (mage), and Jack (rogue). Yet the characters really simply break down into “I am a [ﬁll in an adjective here] [ﬁll in a noun here] who [ﬁll in a verb here].” So you could be a Tough Jack who Works the Back Alleys. While there aren’t a ton of Descriptors (the adjective) or Focuses (the verb) there are enough to get your feet wet and create your own. 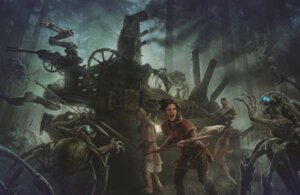 Stats are kept to a minimum as well with only Might, Speed, and Intellect. Along with these you’ll have Pool, Edge, and Effort. I won’t rehash all the particulars as to how these all intermix but simply state mainly you’ll utilize these stats to activate abilities, lower Task Difficulty, or increase damage in combat.

Characters also have skills and abilities, many which are gained as they increase to the next Tier. Tiers are simply levels and characters currently can reach Tier Six. As with many RPGs, the characters unlock new abilities as they reach each new Tier.

Another aspect of Numenera which needs to be mentioned is how experience is earned and spent. Rather than the Monty Haulism of Dungeons & Dragons, Numenera rewards players for overcoming GM Intrusions as opposed to just killing monsters and grabbing loot. These Intrusions are challenges thrown into the players’ paths which they can choose to overcome in order to earn XP or choose to spend XP to circumvent. While this might strike some as railroading players I’ll point out normally in RPGs which are highly story driven (as opposed to those composed of seeming random encounter after random encounter) GMs do need to guide the action quite a bit in order to drive the narrative.

Experience points are used to level up …er… gain your next Tier or spent to help get out of jams. Cook has indicated he believes players will use about half their XP for character advancement and the other half to make life easier for their alter egos. This sounds about right to me although some players may feel they’re constantly forced to spend XPs rerolling dice and such as opposed to using them to improve their character.

I certainly dig Numenera but there are a few items which prevent the RPG from scoring higher. First of all Monte Cook’s insistence in giving tried and true RPG mechanics and terminology new names becomes a touch irksome. While I’m sure there will be a few new gamers checking out Numenera as their first roleplaying game, the majority buying the rules will no doubt be pretty familiar with the genre (even if only by way of D&D) and looking to see what Cook has up his sleeve and to see if Numenera lives up to the hype. Cook seems hell bent to rename nearly everything and while it’s true a rose by any other name would smell as sweet, the fact remains it’s still a rose… 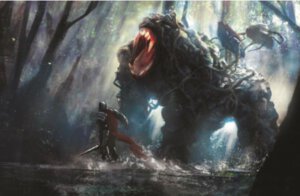 I’m also less than enthusiast at some of the swipes Cook takes at other roleplaying systems. I’m certain Cook still has hard feelings toward Wizards of the Coast stemming from his involvement with D&D Next and subsequent leaving/dismissal, I get that. But there’s some snarkiness which I think could have been left out of the book to better effect. Plus it smacks of just a wee bit too much ego boiling over into the game book.

I have to say the mechanics of Numenera mesh together well to produce a distinctly less “crunchy” system for roleplaying. I like the fact Cook places the emphasis on storytelling and keeping gameplay clicking along. The setting is a little less than original, and the Gazetteer is sort of hit or miss, while the four adventures included are really interesting. Obviously there’s a lot more on the horizon for Numenera but there’s a good number of monsters, gadgets, locales and so forth that you’re surely getting your money’s worth.

Regardless if Monte Cook would like you to believe he’s reinventing roleplaying with Numenera (he isn’t) there’s way more to like about the system than dislike. I can’t say if folks will dig the XP system and the game is truly rules light (at least when it comes to RPGs), and I’ll take a stab many D&D diehards will have loads of negative things to say but I think Numenera is one of the top roleplaying products released in 2013. Numenera isn’t prefect, and I know it’s being pitched more toward newer gamers so I’m probably not the title’s main audience, but I still think the game could turn into a major player in the genre as long as it receives continued support and supplements.

Where I think Numenera is going to make its biggest impact is in the system’s ability to be plugged into nearly any setting. The game world itself is interesting – if not mind blowing – but unlike other titles you have a lot of wiggle room without worrying about going against game canon. There are already some supplements hitting the scene which open up the Ninth World. 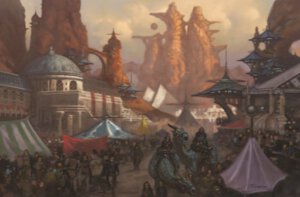 Numenera is for the most part a must buy for GMs looking for something new or even just aiming to cannibalize some mechanics in which to utilize in their own games.

Come on! Any GM worth their salt has hacked and house ruled their favorite RPG to fit their style! I honestly don’t know a single game master, who’d I’d sit in on a game with, running anything strictly according to the book.

Monte Cook has boiled down what he believes to be the essentials of a roleplaying game and incorporated them into Numenera. I can’t say his direction would be the same as my own but there’s a ton of goodness to be found within the four hundred plus pages of the tome and regardless if you were to run Numenera as printed or incorporate some changes – or mine nuggets for your own gaming gang – you’ll surely want to grab a copy.

Monte Cook has boiled down what he believes to be the essentials of a roleplaying game and incorporated them into Numenera. I can’t say his direction would be the same as my own but there’s a ton of goodness to be found within the four hundred plus pages of the tome and regardless if you were to run Numenera as printed or incorporate some changes – or mine nuggets for your own gaming gang – you’ll surely want to grab a copy.