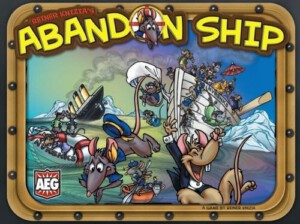 The S.S. Nvrsnks is going down, and who is always first off a sinking ship?  The rats!

Abandon Ship is the new game in which you play to move your group of rats off the ship before the rising water drowns your furry friends. The Nvrsnks is also loaded with valuable points-earning cheese, but don’t let desire for that lovely food send your rats to the watery depths. The water level is rising, get to the boats!
In Abandon Ship, your opponents may also share some of the rats in your group, making for exciting decisions as they may want to move the rats in a different manner than you.
Will their plan send yours into the drink?  With easy rules and strategic gameplay, Abandon Ship is a great new game for the whole family!

Abandon Ship is without question a family game; not a hardcore gamer’s game.  I have played this with my family multiple times and we have had a blast every time.  The rules are easy to learn, gameplay is simple, but there are enough options to keep the adults interested.

Here’s how it works.  You have a gameboard showing the ocean and the night sky.  You insert the ship gameboard into this and the board is set to go.  It is actually pretty neat, but make sure you have enough room because it does take up some space.  The board gets longer as the ship sinks.

Each player gets a tile showing them which 3 colors of mice they want to save in order to get points.  You place all of the mice on deck 10 to start, then the starting player rolls the 8 dice.  The dice are color coded to the mice, except for the white die which is wild.  The player picks a color die that they want to move, move the corresponding color mouse, then the dice are passed to the next player,minus the die that the player already used.  There are special symbols on each die to allow you to make special movements, including backwards or jumping to the next level another mouse is at.  If the die has a number followed by an “x”, then you don’t pull that die out of the dice pool.

Play proceeds around the table, until only one die is left to use.  Then you pull a sinking ship token and move the ship gameboard down the number of levels listed.  Any mice caught in the water will be drown and removed from the game (poor mice!).  Then the next player starts with all of the dice again, and so on.

There are several pieces of cheese scattered on different decks of the ship.  These provide bonus points if you land a mouse on that deck first.

One thing I would have loved to see was a little toyboat to put the dice that are removed into.  As the dice got passed around the table, and each player removed one, we’d sometimes get the active and inactive ones mixed up, or spend precious seconds rounding them all up at the end of a round.

Each player does not select a mouse.  The first thing everyone did was grab a mouse of the color they wanted.  I had to then get them to relinquish said mice, and explain that you get a card with 3 different color mice on it.

The mice start on Deck 10, not the bottom.

Those cheese pieces make a lot of difference!  Go for those points if you can get them.

Make sure that you move one of the mice that is not yours to the top deck first!  They do get squished after all.

Kids under 10 can easily master this game.  Even my 3 year old liked it because she loved playing with the mice, she kept telling me they were penguins.

It works fine with 2 players.  It’s just more fun the more players you get, although I haven’t played with more than 5.

TGG REVIEW
7.9 TGG SCORE
VISITORS' SCORE 0 (0 votes)
Summary
Abandon Ship is without question a family game, not a serious gamer's game. I have played this with my family multiple times and we have had a blast every time. The rules are easy to learn, gameplay is simple, but there are enough options to keep the adults interested.
REVIEW SCORE
What people say... Leave your rating
Sort by:

Abandon Ship is without question a family game, not a serious gamer's game. I have played this with my family multiple times and we have had a blast every time. The rules are easy to learn, gameplay is simple, but there are enough options to keep the adults interested.