Players: One to four

Playing Time: One to eight hours

It’s been a long time coming but I’ve finally found a couple of fellow grognards in the Mishawaka area so I now have the pleasure of tackling some of the wargames which have been stacking up for review. One of the first on my list of to dos was GMT’s Hoplite. Part of the venerable line of “Great Battles of History,” Hoplite includes the battles of Cunaxa, Delium, Ephesus, Leuctra, Mantinea, Marathon, Mycale, Plataea, Nemea, Coronea, and Tanagra for your ancient era wargaming pleasure. While this has been a period of history which has seen its share of simulation before, I have to say this is the first time you’re going to see this much packed into one title.

As per usual, the component quality is the standard excellence we’ve come to expect from GMT and I will point out there are a huge number of counters included in the game – almost 600 in total – so you’ll spend a bit of time making sure all of them are separated and placed in appropriate baggies. Four map sheets cover the locales of the battles and we finish off with the rulebook, a scenarios booklet, and the required player aids. You’ll get plenty of background about the units (eleven different types of troops in all) as well as a rundown on the historical aspects of each battle. 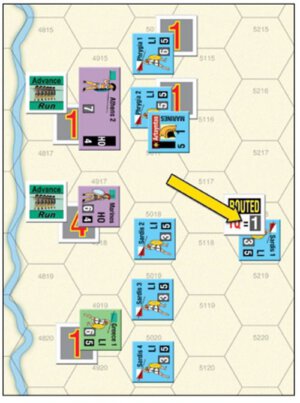 I’ll mention right up front I’m not the most well versed gamer when it comes to the “Great Battles of History” series, or games devoted to ancient history either, but I do have a handle on the period being simmed due to enjoying plenty of books and audio lectures over the years. Keep in mind even today’s scholars can’t tell us exactly how these ancient armies fought, once they met on the field of battle, so you’ll want to note Hoplite is based on Richard Berg’s theories of what may have taken place once the assembled masses clashed. I toss this out there because I’m sure there will be some learned gamers out there who may disagree with the designer’s take but I can say Berg’s adaptation of Mark Herman’s original design does a nice job of providing the flavor (at least in my opinion) of what these conflicts may have entailed during the 4th and 5th centuries BCE.

As with most wargame reviews here on TGG I’m not going to delve too heavily into the mechanics of the system, mainly because I don’t want people to think Hoplite is more complex than it already is but also because many of the troop types have specific rules devoted to them and I’d rather not get bogged down with minutia. Suffice to say though, even with the unique aspects of the units, each game turn breaks down as follows…

Initiative: While Hoplite uses a blind chit draw for unit activation, each turn begins with an initiative roll to determine which side will have one specific unit activate first. The initiative roll is based on the overall commanders of each army and once the high roller activates their troops all the rest of the chits are placed in a cup, or other opaque container, to be drawn throughout the turn.

Activation Phase: Once players move to the blind draw, each will then take turns pulling chits and activating the command indicated on the counter. Each command is then able to perform any one of three actions: Move and/or fire (if they possess missile weapons), Disengage, or Rally.

Orders Phase: The active command can move toward the enemy and/or use missile fire, attempt to disengage from an enemy command, or rally if they’ve been routed. Units can also enter into shock combat (hand to hand) during this phase and opposing command leaders can enter into personal combat.

Rout, Remove, Replace, and Reload Phase: Routed units move wile a bit of cleanup is performed with the removal of various condition markers. Killed leaders are replaced and missile units are eligible to receive reloads.

Withdrawal Phase: As each side loses units, and leaders, points are tallied during this phase to see if one or the other is declared the victor. Each army has a Withdrawl Level and once that is reached the army will quit the field.

Granted, I’m glossing over a lot of the particulars because you can easily download the rules from the GMT site if you want all of the nitty gritty. There’s a lot going on in the system and players will be best served to start very small and work their way up the larger battles contained in Hoplite. Of particular note is the shock combat and the number of steps to resolve melee can be a bit daunting. 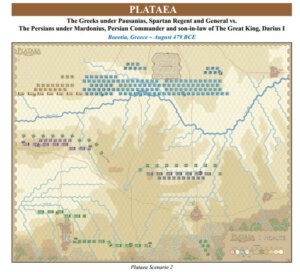 Hoplite probably ticks in a touch higher than the medium complexity indicated by GMT, although those familiar with the “Great Battles of History” series will probably have an easier time of it than those completely new to the series. That said, I do understand there are a good number of changes to the base system for this title. The scenario booklet goes into detail about all the changes applicable to this release.

I have to say I like Hoplite quite a bit although it’s certainly not a title I’d recommend as a gateway into wargaming or even the ancient period. There’s a lot cooking under the hood and some of the mechanics can be a touch tricky to get a handle on, even for those with a lot of years of these sorts of games under their belts. Just make sure you and your opponent have a solid understanding of the rules before you really go head to head as there’s a lot to wrap your head around.

Richard Berg has provided a lot of flavor to make gamers feel like they’re leading Greeks and Persians on the field of battle as opposed to some games which come across as if you’re just pushing bland and colorless counters, rolling dice, and looking at combat resolution charts. Various unit types act differently from one another on the battlefield and this comes across through things like massed phalanxes, shield walls, the Hellene Law of Inertia, and so forth. While Hoplite is a very good game it is surely one which might be a little heavier than some players are used to (including those enjoying many of GMT’s very own wargames) but it’s certainly worth picking up if you’re interested in the rise of Western warfare and the eleven battles contained within.

Richard Berg has provided a lot of flavor to make gamers feel like they’re leading Greeks and Persians on the field of battle as opposed to some games which come across as if you’re just pushing bland and colorless counters, rolling dice, and looking at combat resolution charts.