From The Game Crafter:

In Shake Out! you will be competing against the other players by rolling dice, making combinations and staking claims on cards worth valuable points.
Players take turns rolling their set of dice up to three times to form combinations that match cards on the table. By matching the combination on a card, you can stake a claim on it, but lookout because a better roll could bump you off. Each card is worth points but you can also score big by collecting matching sets.

The next time you want to have a great time rolling dice or a fun fast filler during a marathon gaming session, break out the Shake Out!

The Game Crafter is a website that allows game designers to bring their game concept to reality. Basically, you upload all of the artwork for your cards, boards, and the box, and then select the bits you want to be included in the game. Game Crafter will put together a print on demand copy of the game for the designer to use as a prototype for playtesting and demo purposes. If you feel your design is good to go, they will add your game to their catalog of games on their website where anyone can go and order a copy of your game.

What you end up with is a fairly professional looking game, albeit with a somewhat generic feel to it. While you won’t be publishing something along the lines of “Mansions of Madness”, you can get a nice design off the ground if it is simplistic and elegant enough.

I recently received a copy of Shake Out, produced by Game Crafter and designed by Louis-Nicolas Dozois. Shake Out is a dice rolling, set collection type game, which takes the basic premise of Yahtzee type dice games and adds some modern mechanics to it. Most of us have played games like Yahtzee in family and social gatherings, but once you take the plunge and realize that there are a lot of other games out there, it falls off your play list and you start pushing your family to try different and better games.

To further this end, there have been many games published that are referred to as “Gateway Games” or games that are used to show the average Monopoly, Uno, and Yahtzee players that there is a whole world of gaming goodness out there to explore.

Each of these “Basic” level games has the advantage that everyone knows of them, and most have played them, but they have various design flaws that can turn a fun evening of gaming into an exercise in drudgery. Monopoly can take forever to play. Playing a game of Yahtzee is almost like playing a game alone, that other people just happen to be playing as well. Shake Out enables you to take the fun of dice rolling, and actually make it into a simple, fun, competitive game.

The concept of Shake Out is fairly simple. Two to Four players are each given five dice of a color. There is a deck of cards 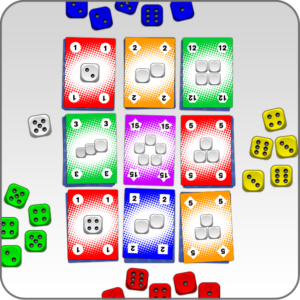 included which each have various dice combinations printed on them, and these come in four colors as well. There is a single “Five of a Kind” card which is wild that is placed in the center of the table, and the other cards are split into eight stacks of six cards each and placed around the single wild card forming a three card by three card square grid with the wild card in the center. The top cards are all flipped face up, so that the players can see which dice combinations that they need to get in order to win that particular card.

Each of the cards are worth a certain number of points if you collect them, and that value is printed on the card itself. You also earn points based upon the numbers of cards that you collect of a certain color. There is a reminder card included for each player that lists the point values of the cards on one side, and the point values of the color sets on the other side.

During their turn, a player rolls his five dice. They look at the table to see which combinations they need to get in order to collect a card. For example, one of the face up cards shows four blank dice in a row, this indicates that you need a four dice straight to collect that card. The player decides to go for it and has three rolls in order to get it, just like in Yahtzee There are eight other cards on the table though, so if you change your mind of make a bad roll there is usually somewhere you can put at least some of your dice.

Once you finish rolling, you place your dice directly on the card(s) that you are attempting to claim. You may not be able to use all of your dice, it all depends upon you roll. If, for example, you place three 5’s on a green “Three of a kind” card, but there are no other cards that you can use the other dice for, then you simply keep those dice until your next turn. 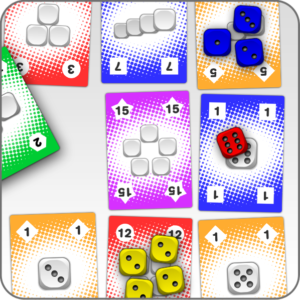 When your next turn rolls around, if no other player had bumped your dice off of the cards that you tried to claim last turn, then you get to take those cards and add them to your scoring pile. Then you pick up all of your dice and roll again, trying to claim more cards. The twist here is that during their turns, the other players can bump your dice off of the cards you are trying to claim, by placing higher value dice on the same cards.

For example, you place three 4’s on one of the “3 of a kind” cards, attempting to claim that card. The next player rolls three 5’s and bumps your dice off of the card by playing their higher value dice on it. The player after that rolls three 6’s and bumps the 5’s off of the card. Since no one can put a higher value “Three of a kind” down than the three 6’s, that player is assured of claiming the card when their next turn rolls around.

The game continues until one of the stacks of cards is empty (excluding the wild card in the center), at which point everyone claims any remaining cards and dice they have on the table and the points are totaled. The highest score wins.

Really it took maybe five minutes to learn how to play the game. It is intuitive and the cards all show what you need to roll and list their point values. There is a surprising amount of strategy as well, as the more cards that you collect of a certain color, the more points you earn. To calculate your score: First you add up all of the point values on the cards themselves. From one point for a single die card all the way up to 15 points for the 5 of a kind wild card. Then you total the cards that you have of each color. If you have three green cards you will earn an additional six points, but if you manage to get six green cards, then you earn 21 points.

It benefits the players to keep an eye on what the other players are collecting and stop them if necessary by bumping their dice off of cards when they can. The whole concept and the components are simple, yet a lot of fun for those who are fans of dice games. If you are looking for a gateway game to bust the crew out of the standard dice game fare, and they aren’t ready to jump straight into Quarriors, you should really take a look at Shake Out. I wouldn’t be surprised if this game got picked up by a bigger publisher.