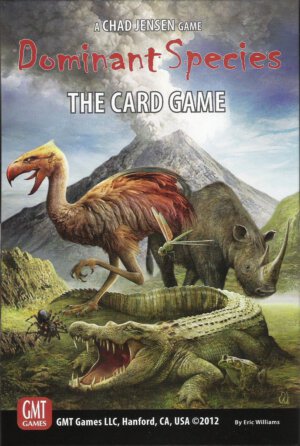 From GMT: 15,000 B.C. – a great ice age is ending. Another titanic struggle for global supremacy has unwittingly commenced between the animal species.

Dominant Species: The Card Game is a fast-playing game that abstractly recreates a tiny portion of ancient history: the ponderous rescinding of an ice age and what that entails for the living creatures trying to adapt to the slowly-changing earth.

Players will use six major animal classes – mammal, reptile, bird, amphibian, arachnid or insect – to further their goals in various terrain. Through wily card play, players will strive to become dominant at as many different terrestrial and sea biomes as possible in order to claim valuable victory points: It is survival of the fittest.

All of this leads to the end game – the final descent of the ice age – where the player who has accumulated the most victory points wins the game.

People probably remember Dominant Species was one of our top reviewed games of 2010 and now that GMT title comes in a card game edition. Or does it? Hmmm…

The board game itself is a bit of a monster title and although some folks have an issue with the game length and, for a few, the sheer depth is a tad overwhelming, but suffice to say it’s a meaty experience which I really enjoy. Now designer Chad Jensen has come up with a card game version and although it’s a fun and interesting design I can’t say it’s Dominant Species boiled down into a card game. This is a far lighter game than its board game brethren but if you sit down to play with that understanding this is a nicely done card game filled with plenty of opportunity to stick it to your opponents while demanding you pay attention to hand management. 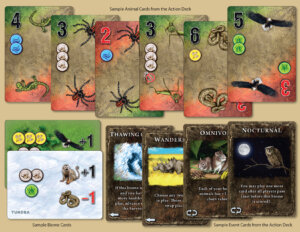 Overall the production quality is nice and if you already know and love Dominant Species you’ll notice the artwork is the same as the current edition of the game. I honestly think we’ve gotten to the point where we should just say “GMT quality” and move right along because we know the company nearly always puts out excellent components.

The name of the Game in DS: The Card Game is scoring points. Over the course of ten rounds you’ll be looking to outscore your opponents, win more rounds, and be crowned the Dominant Species at the end of the game. There are two ways to score points: Through your Food Chain and by having more Elements than the other players each round. Each turn begins by revealing a Biome card which tends to be a great environ for one species while being lethal to another. This means if you play cards of the species suited for that terrain you’ll receive bonuses or, in the case of an ill-suited species, penalties. Other species not indicated on the Biome receive neither bonuses or benefits.

Twelve biome cards are included but you randomly discard two to begin – except for the sea card as that is the final biome to enter play – and each of the first rounds take place on one of the random biomes. Play starts with everyone receiving seven cards and the first player of the first round choosing to play a card or passing. Action cards include Animal cards and Events. Animal cards have a species, Food Chain number, one to four element icons and could possibly show a crossed-off species. Species have better stats when they enter play but if someone plays a card which suppresses another species, and picks your species, you must flip one card of that species to its weaker side. If that weakened card is suppressed again it is discarded so you’ll see a lot of attempts to knock someone’s species out of a round. 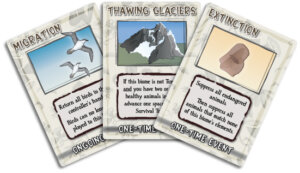 The round continues until all players have passed or any player passes with no cards left in hand. At that point the Food Chains are totaled and the player (or players) with the highest number wins the round and scores victory points corresponding to the round you’re in; i.e. one for the first all the way to ten for the tenth. These players also advance their token one space on the Survival track. Elements are scored according to the Biome in play and each Element represented on the card allows the player with the highest total of each displayed Element to score Victory Points equal to the number of that Element they have on their cards on the table. In the case of ties, all players who are tied score VPs. Then each player gets two more cards and it’s on to the next round – that is unless it’s the tenth round whereas the players each receive an additional number of cards equal to their place on the Survival track.

Alongside the Animal cards are Event cards and they can have some really interesting effects on how the game proceeds. A well-played Extinction card later in the game can be the difference between sitting around in third place or completely upending the apple cart to secure a walk away win. The Event cards add just enough flavor and “take that” to the proceedings to keep everyone on their toes as some are only one time events while other could have ongoing effects.

Once all ten rounds are completed, the player with the highest total of VPs is crowned the dominant species. Of course there are additional rules for breaking ties. 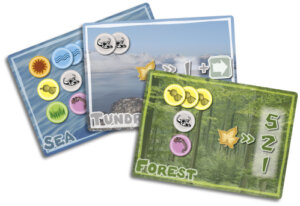 Personally, I had a lot of fun with DS: The Card Game as it’s light enough to sit down with people who might not game much but still offer enough mental challenges to keep you involved every step of the way. You won’t be able to compete every single round and a lot of decision making goes into knowing when to challenge for a Biome and when to sit back and let other players duke it out. You’ll want to remember there are no hand limits in the game but if you play all your cards in a round you’ll only receive two cards in which to begin the next. As opposed to quite a few card games, DS: The Card Game isn’t one in which you can just mentally check out and focus on the TV in the other room or sexting friends on your cell. Yes, I wrote “sexting”…

I appreciate this level of attention required and, with Chad Jensen as the designer (with his wife Kai providing development), I wouldn’t expect anything less. I will mention in a six player game one or two sharp players can run away with the game early if everyone isn’t on their toes as there aren’t many mechanisms to quickly bolt someone out of last place into contention if they’ve played badly. Some people might not like that fact but I enjoy a title that rewards a gamer for playing well as opposed to those which artificially baby poor players in order to provide an opportunity for a cheap, come from behind win. Also, if you avoid player confrontation like the plague, you’ll no doubt take a pass on DS: The Card Game because in order to even compete, let alone win, you’ll have to play cards which negatively affect other players’ species.

DS: The Card Game is loads of fun with the right crowd; one which likes to remain on the ball throughout the entire game. I can’t see sitting down and playing it as a two player but, with four to six, this is a good time. Folks expecting this to be a slimmed down version of Dominant Species are going to be sorely disappointed but people who may not even have interest in the board game daddy of the title may be surprised how much they enjoy Jensen’s newest design.

Warhammer Age of Sigmar – Soulbound: Refuges of the Realm is Out in PDF