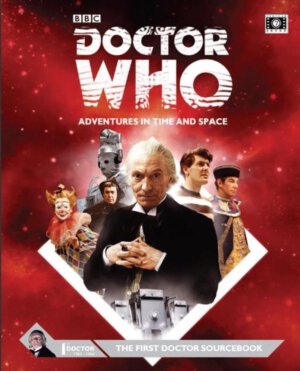 Game Name: The First Doctor Sourcebook for Doctor Who: Adventures in Time and Space

When I reviewed The Doctor Who Adventures in Time and Space RPG, I made it very plain I was disappointed in how little of the near fifty year history of the show was mentioned. I understand there are plenty of Who fans out there who have nearly no interest in anything in the series which took place prior to the relaunch in 2005 yet my “first” doctor was Tom Baker, when I discovered the show on the local PBS station back in Chicago as I was preparing to enter high school. Following that I began to swing over to a book store which specialized in science fiction and fantasy (The Stars Our Destination) finding those imported Target books which introduced me to the three Doctors who came before Baker. I suppose that lead to a majority of my disappointment with DWAITAS in its David Tennant and Matt Smith editions. 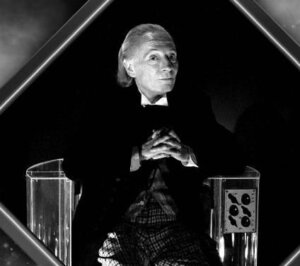 Now, with the 50th anniversary of the Doctor on the horizon, Cubicle 7 has begun to release their series of sourcebooks dedicated to each of the Doctors and I’ll be the first to say the initial offering in the series is exactly what I hoped it would be. If you run DWAITAS this is a must have and even if you have no interest in the roleplaying game, any fan of Doctor Who is going to want to have this sourcebook on their shelf! I’d say players of the roleplaying game might want to control their desire to give it a read simply so they don’t ruin any of the fun if their GM plans to utilize the wealth on info contained within.

It’s important to remember the first Doctor was very far removed from what we’ve come to know during the modern Russell T. Davies/Steven Moffat years; William Hartnell’s Doctor was crotchety, cranky, mainly set against changing history and not happy about having companions aboard the TARDIS – outside of his granddaughter Susan. The first Doctor also appeared as an elderly man and didn’t have a great amount of stamina. It’s fun to look back at the adventures of the first Doctor as mainstays of the series such as the Daleks and Cybermen make their debuts. Unlike the tales of later Doctors there are fewer appearances of monsters and more focus on historical stories or alien cultures. 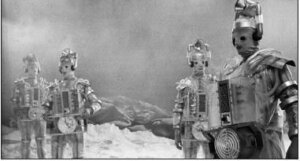 The sourcebook is broken into ten chapters where the first talks about gaming in the style of Hartnell’s Doctor as well as the early TARDIS (which at this point in the canon is simply a machine) and the real lack of control anyone has over it. The tone and execution of the early and mid-1960s episodes are nothing like we’ve come to experience these days and this chapter tackles the differences in setting. The chapter closes with three quick adventure seeds as ideas how the first Doctor stories can be played out.

The rest of the chapters are devoted to the twenty nine adventures in which Harnett appeared as the Doctor. Each adventure is broken down into four sections: synopsis; running the adventure; characters, aliens and gadgets; further adventures.

Synopsis – Obviously enough this is a detailed breakdown of the televised adventure. Some are a bit shorter than others but this makes sense mainly because each story arc would have anywhere from one to twelve episodes. Also some of the “lesser” stories don’t seem to get a lot of due but that’s understandable as well.

Running the Adventure – Interestingly enough, each adventure isn’t broken down into only replaying the tale as broadcast but also plenty of ideas as to presenting the major beats of the adventure without making it simply a rehash. GMs can also take advantage of tips on how to make players invested in the adventure rather than just climbing back in the TARDIS and getting out of Dodge. 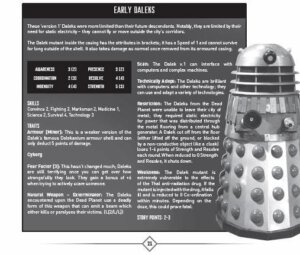 Characters, Aliens & Gadgets – The specifics for all the different characters, cultures, aliens, monsters and machines featured in the adventure are presented. You’ll also find various breakdowns of the evolution of the Daleks as they changed over time. Much of the info is included as sidebars and stat boxes within the Running of the Adventure section but some more in depth info is included here. Surprisingly the historical figures in the stories seem to get a little bit of a short shift in this section.

Further Adventures – Here you’ll find a handful of what ifs and additional adventure ideas to build adventures down the line following up in the action from the story in the synopsis section. For the most part these seeds make for interesting reading.

Overall the presentation of The First Doctor Sourcebook is top notch with plenty of black and white photography. Unlike the core game book, I found the ratio of photos to text to be just right; you won’t feel as if you’re getting cheated out of gaming material because of an overabundance of pics. I really think Cubicle 7 has done a great job with the sourcebook and, as someone intimately familiar with the existing episodes of William Hartnell’s time as the Doctor (in the 1970s the BBC wiped many video tapes which contained the shows in order to save cash by rerecording over them) the writers have captured the feel of the adventures nicely.

As mentioned earlier on, this is a great pickup for not only players of the RPG but even for folks who are just fans of Doctor Who. The book is filled with great info and ideas for GMs of not only DWAITAS but other generic RPG systems too. Granted, the book is written in a style which will appeal to players newer to the RPG genre but even more experienced gamers will get a lot from the volume also. Now Cubicle 7 has released the Second Doctor book and I’ll be looking forward to checking that out as well since I’m a bigger fan of the Patrick Troughton adventures than the William Hartnell tales.

In my opinion, DWAITAS becomes a much richer game (and much more appealing to run) with the new line of Doctor sourcebooks.

This is a great pickup for not only players of the RPG but even for folks who are just fans of Doctor Who. The book is filled with great info and ideas for GMs of not only DWAITAS but other generic RPG systems too