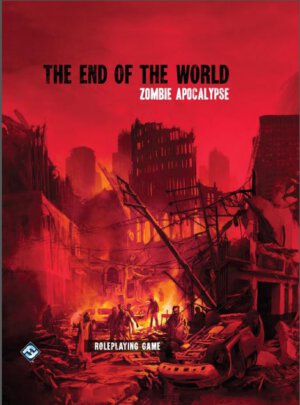 Game Name: The End of the World – Zombie Apocalypse

When I first heard about the new line of roleplaying games on the horizon at Fantasy Flight Games I was intrigued. Four new titles were aimed at presenting different apocalyptic scenarios: zombies, alien invasion, wrath of the gods, and the rise of the machines. As someone who’s always had an interest in apocalyptic and post-apocalyptic stories (Stephen King’s The Stand is still to this day one of my favorite reads) I was looking forward to getting my hands on FFG’s The End of the World series and earlier this week the first release, Zombie Apocalypse, arrived.

What hasn’t been made overly apparent by Fantasy Flight Games is the entire The End of the World line isn’t a new series of roleplaying games at all but moreover simply translations of the Spanish language El Fin Del Mundo system already available through Edge Entertainment; Edge currently partners with FFG, as well as other companies, to provide Spanish editions of English language games including the mega-popular Star Wars RPG. While you might not think this would be a big deal, the reality is buyers are going to be surprised when they pick up The End of the World – Zombie Apocalypse and find the title doesn’t meet the usual high standards of FFG as far as production value and amount of content. The game credits Andrew Fischer as the designer based on Álvaro Loman’s original 2013 game. 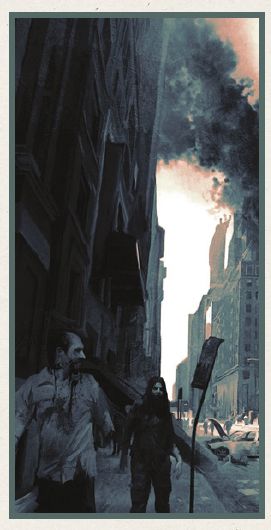 The main push of The End of the World series is for gamers to portray themselves in a fictionalized version of their own backyard. Of course, a backyard in the midst of a catastrophic event in which all human life as we know it is on the brink of extinction.

Character creation is relatively simple, as are the core rules in reality, with six standard characteristics in three categories: Dexterity and Vitality make up Physical aspects, Logic and Willpower are Mental, while Charisma and Empathy are the Social category. These characteristics are graded on a scale of one through five and begin at level one. Players may then assign ten points to the stats to improve them on a straight one to one buy ratio. If the gamers are playing representations of themselves then the group then votes on the characters by secretly placing positive and/or negative dice in a bag and then revealing the totals for each category. If there are more positive than negative dice then the character may raise one of the two attributes by a point. If more negative then one of the stats has to be lowered by one. If the dice are equally divided then the stats stay the same. This voting takes place three times; once for each category.

Next the players will assign Features to their characters. These can be either positive or negative and characters begin with one of each for the three stat groupings. If the group voted to improve a stat group that character has to include either an additional negative Feature or remove the positive. If the group voted down a grouping then the character gains a positive or discards the negative. Features can be wide ranging from Natural Leader, to Bad Back, to Great with a Bow. The rules include a handful of both negative and positives but it’s completely up to the players what they include for their characters. Players follow up Features with Traumas their characters might possess. Did you throw your back out helping your friend move earlier in the day? Then that’s a Trauma. Obviously, Traumas are only setbacks – both mental and physical – a player would be willing to share with the group.

Lastly players will equip their characters based on what they physically have in their possession or close at hand. Cell phones, pocket knives, energy bars, and so forth are considered equipment. In most cases the characters will surely be unprepared gear-wise for the undead hordes.

Action resolution in The End of the World – Zombie Apocalypse breaks down into Tests. Any action which has a chance of failure, involves opposition, or could inflict harm becomes a Test. The Game Master determines what characteristic the Test falls under then the player will collect his dice pool to roll. The dice pool is composed of positive and negative D6s (preferably of two different color to determine one from the other) where advantageous Features, equipment, assistance, and situations can earn positive dice while the difficulty, danger, Features working against the character, Traumas, and disadvantages of the situation add negative dice.

Once the player has assembled their positive and negative dice they’ll roll the whole bunch. Each negative die result matching the pips on a positive die cancel each other out. If any positive dice remain which are lower than the designated characteristic then the action succeeds. If not, then you fail. 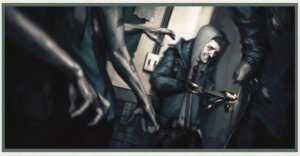 The game system comes across as a poor man’s version of the popular Fate line of RPGs.

All told the rules of The End of the World chimes in at twenty four pages with an additional ten pages devoted to running the game. The reality is the rules are more of a skeleton than a fully fleshed out system. What most gamers will probably be more interested in are the five included scenarios involving the rise of the undead. GMs can chose from Night of the Meteor (a scenario reminiscent of the 1980s film Night of the Comet), No Room in Hell (anyone who has seen Dawn of the Dead will be familiar with this line of thinking – all the souls of the dead are remaining on Earth), Pandemic (A worldwide viral outbreak causes the dead to walk), It Ends with a Whisper (If you’re going to lift from T.S. Eliot then this should be titled Whimper… but this scenario deals with zombie mythology and voodoo), and Under the Skin (a strange parasite infects humans and animals causing them to feast on brain tissue).

Each scenario runs around eighteen pages broken into an apocalypse and post apocalypse section along with a timeline of early events. The scenarios provide a high level of what’s taking place with a few example locations with events and encounters. Also included are some NPC prototypes such as the sort of undead the players will battle as well as human survivors and military types.

I mentioned early in the review The End of the World was a series I was solidly looking forward to checking out and, sorry to say, the first release is a major disappointment for quite a few reasons.

While the push is to roleplay fictional representations of the actual gamers I can’t say I’m a fan of the approach, especially regarding scenarios where hordes of flesh eaters will be killing the players’ family and friends. Personally my friends and I have always bounced around what we’d do if a nightmare like Dawn of the Dead were to come true. While a selling point of The End of the World – Zombie Apocalypse is to put the players in their own shoes, the reality is I can’t see most GMs pulling this off entertainingly. Luckily, this aspect isn’t a game breaker as the rules mention easily creating completely fictitious characters.

Where the bigger issues arise is in the system itself and the scenarios. Everything included is effectively. no pun intended, barebones; be it ideas for character Features, creating Tests, and even how to run the game itself. The scenarios themselves are interesting takes on the zombie genre but boil down to nothing more than adventure nuggets as opposed to fully fleshed out settings. As an example, the Pandemic scenario includes six locations: Apartments and Houses, The Coast, Highway, Devastated Hospital, Old Fort, and Ship. The characters would certainly find themselves in a lot more locations than simply these. All the included scenarios will need to be completely expanded upon by a GM and, even with a starting point, plenty of work is ahead for anyone looking to run the system.

I’m curious as to what the original El Fin Del Mundo Holocausto Zombie includes since the Edge Entertainment website indicates the book contains 288 pages whereas The End of the World – Zombie Apocalypse clocks in at 144. This leads me to believe FFG has trimmed a ton of content from the original game and believe me it shows. Add to this the pricing of The End of the World is $39.95 (compared to El Fin Del Mundo’s pricing around $23) and you’re looking at a product which is awfully expensive per page, considering how much space is taken up by art, while not being overly useful. Maybe getting the PDF to mine for inspiration aimed at a much meatier RPG such as All Flesh Must Be Eaten or even the Fate core rules would be the direction to take. Otherwise I can’t recommend The End of the World – Zombie Apocalypse for anyone but the most diehard of undead gaming fans or people who feel a need to grab everything FFG releases.

Everything included is effectively. no pun intended, barebones; be it ideas for character Features, creating Tests, and even how to run the game itself. The scenarios themselves are interesting takes on the zombie genre but boil down to nothing more than adventure nuggets as opposed to fully fleshed out settings.