“Each year, the International Bridge Racing Association selects a city for its many bridges to host its annual Bridgetown Race.  This year they have chosen Portland, Oregon USA.

Each round, players arrange for transportation by placing coordinators on the transportation mode or special action of their choice.  Next the player chooses a transportation mode and moves their racer through the streets, trying to be the first to cross a bridge and pick up its flag. The flag is placed on the player’s Bridge Completion card and the first person to collect all 8 flags wins the race.”

Bridgetown Races is one of the latest from Gryphon Games and I’ll lay it right out there: it’s a fun game. This is a racing game where each player is vying to capture the flags using various modes of transportation, within the five rounds allowed. Each flag represents a different mode of transport; blue is by streetcar, white is on foot, yellow by taxi and so on.

Each of the colored flags is randomly placed on each of the eight bridges during set up. There is one exception as the blue flag is always placed on Steel Bridge. Every round players will have three transportation “coordinators” they place all of these coordinators – one at a time in clockwise order – on the transportation roundel until all are placed. The roundel is broken up into each of the seven modes of transportation and players may only select a particular mode once per turn.

Beginning with the starting player, one of their coordinators is removed and they move their racer a number of spaces, corresponding to the speed of that mode of transportation, along their path on the board. Each mode of transport has a different speed starting with moving one space for being on foot up to five spaces for the street car. If you cross a bridge with a flag matching your transportation mode, you get to claim that flag and place it on your scoring card. There’s a lot of planning involved so you want to make sure that you choose your transportation wisely. A good clue as to what your opponents have planned is to watch what transportation they’re choosing on the roundel.

There are a couple of other factors that come into play making for an even more interesting race.

First of all, there are three special actions that can be selected as opposed to picking a mode of transportation: First, Swap and Double. These special actions may only be chosen once each round – once a player chooses one that action is no longer available. “First” simply enough allows that player to move first. “Swap” gives you the ability to swap flags on any two bridges. “Double” lets you to move double the number of spaces normally allowed for a given coordinator.

Secondly, when you select a coordinator to move your racer, you get not only its base movement but also add an additional space for every other player’s coordinator that is still left on that transportation mode. So, as an example, if you’re traveling by car (a move of three spaces) and a player still has their coordinator on the car section you’ll move four spaces. You do have to move all of the spaces though and this is something that clever players can take advantage of to force an opponent to move too far by a certain mode. 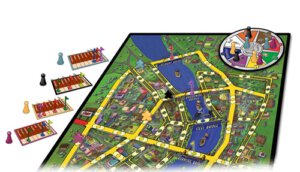 Bridgetown Races is a fun game and gives players a real sense that there’s a race going on – a feel that many racing games unfortunately don’t bring to the table. I will point out that the components overall are fairly “meh.” They aren’t a knockout by any stretch but they are serviceable and not horrendous by any stretch. After your first game or so you really won’t notice the components much anyway. The board has a cartoonish feel to the art but that doesn’t detract from the game at all. I mention the art because by looking at the board you’d think this was a very light-hearted game but I find that far from the case.

I believe the game plays best with three or four players and there’s plenty of interaction going on with that number of players. The early leader is always wearing a target on their back and the game seems to end in a photo finish more times than not.

Just because you can finish in thirty minutes or so doesn’t mean that this is simply filler; you’ll find that there are a lot of options available to put together a winning strategy. Bridgetown Races presents a nice clean racing game that will appeal to players everywhere.

A nice racing game from the folks at Gryphon. There's enough strategy to keep long time gamers involved and simple enough for the introductory crowd as well.