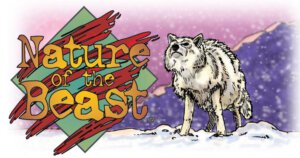 Game Name: Nature of the Beast

In Nature of the Beast, you will take control of an animal army fighting for total domination! Be the first to fill your playing field with animals and claim victory! In the process, you’ll be solving a challenging puzzle as you try to move your recruits as permitted to fill the empty spaces in your field. Be warned though, unless you control your combative instincts you may lose everything to your Dark Nature…

Nature of the Beast (NotB) is a strategic expandable card game available in two exciting Battle Boxes. Each Battle Box is a stand-alone, two-player game.

Nature of the Beast is a non-collectible card game. That means no need to buy booster packs. We give you all the cards. No rarities. Just a sweet self-contained game for two people (or four if you buy another box).
Race to fill your playing field by shifting your animals around. Animals’ movement is governed by differing combinations of arrows on each card, so as you play the puzzle changes!

Winning means playing smart to fill your field, not playing ‘whack-a-mole’ against your opponent. With each attack, you risk driving your army into the sinister region of ‘Dark Nature’. While an easy path to more power, this can lead to the destruction of your army if allowed to go too far!

The ONLY game where a hamster can take out her opponent’s playground with a gasoline can! Nature of the Beast is a serious strategy game that you can actually get a couple chuckles from while playing and it won’t cost you a fortune to play.

Nature of the Beast has been around for a few years, and yet I had never heard of it. I wasn’t expecting much but here I was proved wrong.

NOB is a card game. It currently comes in two different flavors: The City vs. Suburbs box and the Farm vs. Forest box. 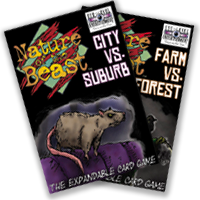 Each of these boxes contains two decks, enough for two players to play a game. The main difference is of course the types of animals in each deck, as is apparent by the name.

The premise is that you are building an animal army which is fighting for total domination of the animal kingdom. You will be recruiting animals from your deck to play into your field, an imaginary 3×3 card layout in front of you. Once you fill your field with animals, you win the game.

What surprised me about this game is the complexity. For a simple card game there is a lot going on, so it isn’t actually simple at all. There are two pre-built decks in each box. Each deck consists of Tricks and Troops. The troops are the animals that you will be recruiting to your army, and the tricks are the many other actions you can perform in the game.

Each Troop card has several stats. Combat is their combat strength, Clout is their ability to recruit other animals, and Cunning is their intelligence. The main stat is their Rank: the higher the rank the better the animal. There are also some secondary stats such as their habitat (City, Suburbs, Farm, and Forest), their size, and their movement type. These stats apply mainly to different trick cards or animal abilities.

Each Troop card also has up to eight small arrows in the corners and cardinal points. These are called vectors and indicate in which directions the animal can move about the field. If there is no arrow, the animal can’t move in that direction. Finally, each animal has a picture, name, special ability, and some flavor text.

The artwork is good, but my favorite is the flavor text. There is some good stuff there. It is east to ignore the text if you are in the middle of a game, but I recommend you read them over. Some are funny, most are amusing. I was scratching my head for a moment when I ran across the H2Orangutans, and then I laughed when I realized they were Sea Monkeys!

Initially, you start the game with three tricks and three troops laid out face down into your Pen. You pen is a row of three cards just below your field, and this is where your animals move out of when they are recruited. 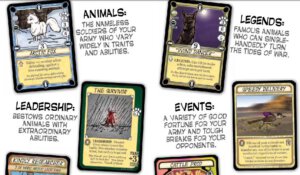 On your turn, you flip over up to all three cards in your pen. You get to draw tricks for each troop card you don’t flip over. At this point you get to perform three actions. The main one is recruiting an animal. To recruit, you need to use enough clout to equal or better the rank of the animal you wish to recruit. To do this, you can either trash animals in your pen to use their clout, or tilt (tapping to you Magic enthusiasts) animals in your field to use theirs (or a combination of the two). Once you have obtained enough clout, you move the recruited animal into your field, following the movement arrows (vectors). If the space in your field isn’t open, you can’t move an animal there, so you need to keep the back row of your field as open as you can.

Other actions include moving an animal in your field, drawing a trick card, un-tilt an animal (they do not un-tilt automatically), move an animal back into your deck, and declare a battle.

Battles are fairly simple. You declare which animal is attacking which other animal on your opponent’s field. The defender can play cards to add to their defense, then the attacker can as well. You can enlist allies from animals surrounding the attacker to give yourself a combat bonus, and then you compare the final combat numbers. The attacker wins if their combat total beats the defenders total. The losing animal is trashed.

Regardless of the outcome, the attacker gains one point of fury. There is a card which keeps track of favor and fury by 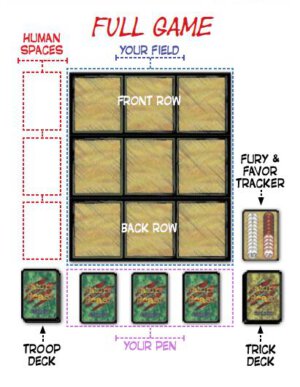 using pennies. If you ever hit ten fury points, you lose the game. You have made your army’s actions too noticeable and the humans got together and wiped you out. Favor is used to play various item cards onto your animals.

There are a few actions that are free, like calling a human ally, claiming a location, or playing an item. On top of this each animal has a special ability which are all very different.

Game play rotates to each player in turn and continues until a player wins by filling his field with recruited animals, or only one player remains when the other players lose due to too much fury.

As you can see, there is a lot going on and a lot of options. It actually got a bit confusing trying to keep track of all of the abilities and options with the various trick cards. I’m sure this will become easier over time, as you get greater familiarity with the cards, but it will take a few plays to get a feel for it.

Once this happens, you can try assembling your own deck, using the included deck building rules. You can build up some powerful combos, but you might need a few decks to do it. At least you know what is included in every box of cards you buy; there is no worrying about buying a bunch of Boosters to get the cards you need.

I liked this game. It had a lot more depth than I was anticipating and I’ll just bet a group of Magic players would get a kick out of Nature of the Beast. I enjoy the dark/funny theme with cute animals that can be deadly. Eye Level is currently Kickstarting the next set of decks for the game called Prairie vs. Polar. 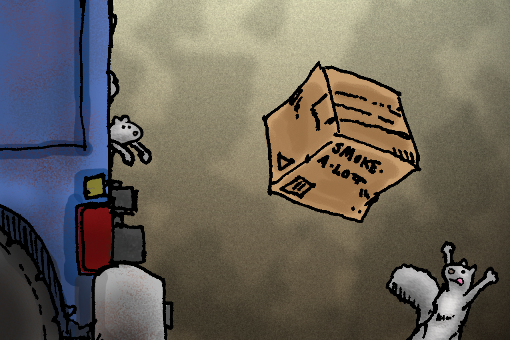