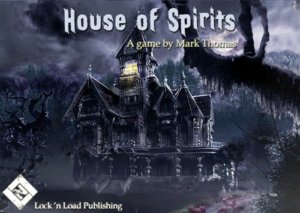 No one knows what has led each of you to this cursed house on the hill, but here you all stand, poised to enter. The previous owner was rumored to have discovered the secrets of the house. Can you recover the fragments of his diary before it is too late? You’ll have to work together…but look out for number one while doing so.

House of Spirits is a spooky little card game from Lock ‘n Load Publishing, outside of the regular wargame fare the company produces. It has a lot more under the hood than the small, unobtrusive box would indicate.

The box is actually one of the first problems that I have with the game. It has some nice spooky artwork but it is flimsy and seems like it will fall apart rather quickly. The cards will also slip out of the bottom fairly easily unless you tape it shut.

The cards themselves are also thinner than I would expect, thinner than regular playing cards, so they don’t seem like they would stand up to a lot of repeated play. The artwork on the cards varies from realistic to cartoonish, and I like it. The combinations of different styles is reminiscent of the different styles present in much larger card games like Magic the Gathering. Each card has the illustrators name listed on it.

The deck of 72 cards are broken into several smaller types. Including: 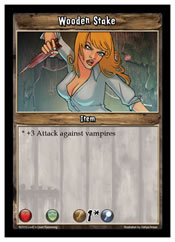 What you don’t get is the six sided die that you need, or a way to keep track of your health and the monsters health, and each player’s score. Sure, we all have dice and a pen and paper but sheesh. Toss the cards in a Fluxx sized box, throw in a die and a small sheet of tokens and it would be a vast improvement.

To setup the game, you shuffle up the room cards and place the vestibule card on top. This is always the first room that you enter. The plot cards are also shuffled and placed in another stack, and another stack is made of the monster deck. The event and item cards are shuffled together to form the main deck and you have all the decks you need. All of the card backs are labeled so that you can easily separate them into the correct piles, which is nice. Each player is dealt a random character card and secret victory condition card, then you are ready to play the game.

The character cards have four stats on them. Health, which is your hit points. Attack, defense, and investigation scores. Each investigator also has some special ability that gives them a certain advantage during the game. The secret victory condition is some special thing that you must do during the game, and if you accomplish it you will get an additional four victory points when tallying your score at the end.

The first player is determined by rolling the die. The first player then turns over the vestibule room card and one card is turned over in the play area from the main deck for each player. In a four player game you would turn over four cards. The vestibule is the only room where there is no chance of running into a monster, so all of the cards will be either events or items so that the player can gear up before proceeding into the house proper.

Each turn a player can do one of several possible actions, starting with the first player. 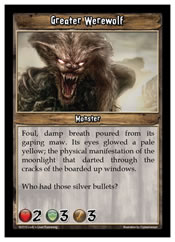 Investigate: The players can only win by collecting and playing all of the plot cards, of which there are seven. To pick up a plot card you must investigate, and to do this you must beat the investigation score of the top plot card in the stack. You do not know what this number is, so you might fail in your attempt. During a round of player turns, only one player can investigate. So if the first player investigates and fails, no other player can investigate that turn.

Play a Plot Card: After you gain a plot card, you may play it on a later turn if you meet the conditions specified on the card. You also get three victory points for playing a plot card. When the seventh plot card is played, the game is over.

Pick up a card: You can pick up one of the available cards that were flipped up at the beginning of the round. It may be an item or an event that you can use immediately. Items give various one time bonuses to one or more of your stats, while events are things that you can trigger just by picking up the card.

Heal Someone: Some of the item cards have the ability to heal. You can use one of these as your action.

Attack a Monster: If there is a monster on the board, you can attack it. In fact, someone must attack each monster on the board at least one time during a round. So if you happen to be last in a round and none of the other players attacked the monster, you have to do it. Attacking is simply taking your attack score, adding any item bonuses, and rolling a die. The monster uses his defense score and also rolls a die. If you beat his total than you do a point of damage. If you beat his total by double you do two points of damage. If you kill a monster you earn victory points. If he isn’t dead then he attacks you in return in the same manner.

Whenever a round ends with no monsters in the room you are in, then a new room is flipped up by the new first player. These rooms might have monsters in them, and this is indicated by a number of skulls shown on the room card. Each player must roll the die, and if they roll equal or less than the number of skulls on the room card a monster appears and you flip over a monster card to add to the room. Once everyone has rolled, you flip over cards from the main deck to bring the total number of cards in the room uo to the number of players.

In a four player game for example; if two monsters appear then two additional cards are flipped to bring the total up to four cards (two monsters and two items). At least two of the players must fight a monster this turn, although everyone can fight them of they wish. You cannot leave a room until all of the monsters are dead.

I enjoyed playing House of Spirits, although it does have some problems. If there were more cards it would add a lot to the game. Once everyone started hanging onto their items, the four event cards came up a lot more often which got annoying. Plus there are only ten monsters, so they get repetitive after a while. Near the end of the game there are no plot cards left, so two actions are gone. If there are no monsters on the board everyone is basically left with picking up a card. There should be some additional action that you can do when all of the plot cards have been drawn, like some additional cards or maybe a boss monster or something.