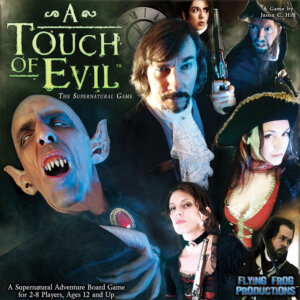 Game Name: A Touch of Evil

A Touch of Evil, The Supernatural Game is a fast-paced game of fiendish creatures, dashing Heroes, and high-adventure. Each player takes on the role of a unique monster-hunting Hero, racing against time to stop the forces of darkness from claiming another foothold in the world of man. Only by investigating the town and building your Hero’s strength can you hope to hunt down the Supernatural Villain to his Lair and defeat him in an epic Showdown. Players can race Competitively to be the first to defeat the Villain and save the town, or they can work together Cooperatively to defeat a much stronger Villain.

I’ve played a few Flying Frog Games now. What struck me when I first spotted A Touch of Evil and Last Night on Earth at my local game store was that unlike most games there were actual pictures of people dressed up as different characters on the boxes. I thought that the vampire on the Touch of Evil box was probably one of the goofiest vampires I had ever seen. It set their games apart from the rest of the crowd though, and it allows Flying Frog to bring along the actors to promote their games at conventions. It’s brilliant actually, but are the games any good once you get pulled in? So far, yes they are.

A Touch of Evil is a horror game where the players are struggling against various supernatural creatures to defend the town of Shadowbrook. The game is set around 1800 which makes it a bit unique in the vast array of horror games. The object of the game is to track the villain to his lair and defeat him in a final showdown.

The players can all lose as well. The game includes a shadow track that measures the amount of influence the villain has 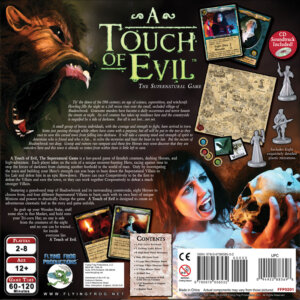 over the town. If the track ever moves down to zero, the villain has taken over and everyone loses.

The components for the game are excellent. Everything is full color and glossy. The board is map of the town and the surrounding areas. Some spaces have special functions that can be performed there like healing wounds at the doctor’s office. There are eight characters to choose from and these include Karl the Soldier, Heinrich Cartwright the Drifter, and Katarina the Outlaw. Each character is printed on a thick 3” x 5” full color, glossy board and the boards display a picture of the character, the number of wounds they can take, their special ability, and their attribute scores.

The attributes are Spirit, Cunning, Honor, and Combat. These will be used to pass various tests that happen during the game, and also during combat. Your score tells you the number of dice to roll and you achieve success on a roll of 5 or 6. The special abilities are varied and can come in pretty handy. Katarina the Outlaw can score a hit during a fight on a 4,5 or 6 while Heinrich Cartwright draws two events instead of one and picks the one to keep. Each character has their own unique benefit.

On the evil side, there are four possible villains you can face. You select one of these at random during game set up. The villains are The Werewolf, The Scarecrow, The Vampire, and the Spectral Horseman. Each one has their own character boards, plus a separate huge card that has the charts for generating the villains minions when you are forced to. I should mention that the game has both a basic and advanced version, and the main difference between the two is that the villains get more abilities in the advanced game, and the minion card has both a basic and advanced side. They recommend playing the basic game at least once to learn everything before tackling the advanced game, and I agree. The extra options might get confusing if this is the first time that you have played.

As far as cards go, there are a lot of cards in A Touch of Evil. You’ll have a location deck for each of the four corner locations on the board. You can draw a location job if you explore that area and the cards can range from a cool new item, to a nasty minion that you’ll have to fight. You could also gain some investigation markers. These are the main currency of the game and are used for everything from buying items while in town, to investigating a Town Elder, to starting a showdown with the villain. 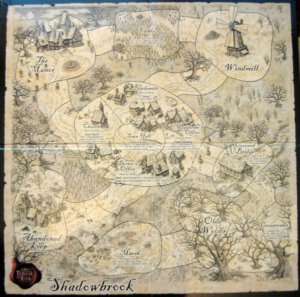 The game comes with six Town Elders, and these function as NPCs (Non-player characters) in the game. There is a deck of secrets, and at the start of the game you shuffle these up and place one face down under each town elder. The secrets can either be harmless or the town elder could turn out to be evil. This is important because when you start a final showdown with the villain you are allowed to take two town elders with you to assist. If they turn out to be evil, then they join the villain against you. You can investigate the elders one by one during the game by spending investigation markers. This will allow you to look at their secret to see if they are evil or not.

Other cards include the deck of event cards. These help the players and you can hold on to them to play when you need them (unless marked play immediately). Mystery cards are the villain’s deck and usually spell bad news for the players. One mystery card is drawn and read aloud during the mystery phase of each turn. Town item cards are available for purchase in the town and players are allowed to look through them to buy the one they wish.

Finally, the lair cards represent the location that you will find the villain to start a showdown. Their cost varies depending upon how far down the shadow track has moved. At the beginning of the game they are very expensive but as the monster unleashes his horrors upon the town it gets easier for the players to track him down. You cannot start a showdown with the villain without a lair card.

The game itself is played in a series of rounds in which each player takes a turn, and then the villain gets a chance during the mystery phase. During your turn you’ll roll a die and move, fight any enemies in your space, and take some actions like having an encounter, healing, looking at a town elder’s secrets, buying a lair card, or starting a showdown. During the mystery phase you’ll heal up the villain if he has any wounds and then draw a mystery card and simply follow the instructions on it. It is usually bad, trust me.

Combat involves the player and the villain/minion (rolled by another player) pitting combat test rolls against each other. Each success is a hit and causes one wound. Whoever runs out of health first loses. If the player loses he is knocked out and sent back to the town hall where they will lose 1D6 of items, but join the fray again on their next turn.

A Touch of Evil to me reminds me of an Arkham Horror Lite game. It is easier to set up, pretty thematic, and takes less 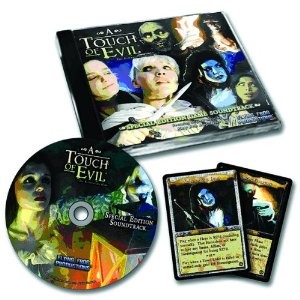 time to play. All of these are good things. There are specific minions for each villain, and you might even be turned into a werewolf yourself if knocked out by the werewolf villain. If this happens you’ll be forced to attack another player during each mystery phase until you can get a cure. This was a pretty cool touch to add to the game.

Additionally, the Town Elder’s with their secrets are a neat mechanic that is unique to ATOE to my knowledge. Combat is simple, an there isn’t any player elimination which is also a big plus in my book.

There are a few potential problems with the game too. The first part of the game can be slow and a bit boring as you simply wander around from location to location trying to collect items with no real sense of direction. It takes a while to get powerful enough to challenge the villain, and it may take a while for minions to pop up. The minions are always the same depending upon the villain, and it has a real effect on the game. For example, The vampire has three different minion types you can find yourself fighting off, while the scarecrow has one, the locust swarm. Fighting off swarms of locusts can get humdrum after a while. I think there should be more minions and more combat opportunities early in the game to get the player’s juices flowing.

Downtime can also be a problem with greater numbers of players. The game supports up to eight players, but the downtime between turns weighs on you once you get upwards of six players. Also, it took me a few minutes of pondering to figure out which miniature went with which character card. Some were easier than others to figure out, but it would be nice if there was an easier way to know who was who.

The games that I played were varied in the fun to time spent playing ratio. Some games were excellent, with lots going on and the players all working to beat the shadow track, but then there were other games where the shadow track would hardly move at all based upon the mystery cards drawn, and the game would linger on. In competitive play, you are at least racing against time to beat the other players, but in a co-op variant the game sometimes seemed to drag.

However, we did have games that were brilliant and loads of fun that finished in a decent time span, and those times make A Touch of Evil worth the buy in my opinion. I’m a big horror fan and this game fits in nicely. It is my understanding that the Something Wicked expansion adds some great new features to the game, and I hope to get a look at that along with the Coast expansion that was just recently released. Overall a decent game.

One final note. As in many Flying Frog Games, there is a CD included to add some additional atmosphere to your game. It’s a decent collection of music if a bit short on running time, and several tracks really do stand out. I love that Flying Frog does this for their games; it’s like finding a note from mom in your lunchbox.