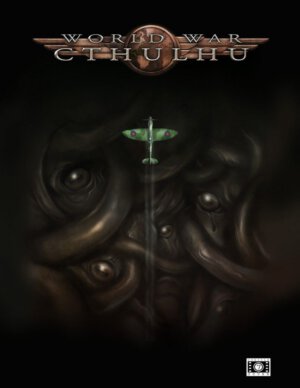 Players: It’s an RPG so best with 3 or more

Ages: 14+ (my guess based on the subject matter)

There’ve been plenty of horror RPGs over the past few years set during World War Two and that may lead some to question if Cubicle 7’s entry into the WWII/Cthulhu Mythos is really necessary. Keep in mind Achtung! Cthulhu hit the scene not long ago so it’s understandable if folks out there might be wondering how World War Cthulhu stands up against the Modipheus series or if the Cubicle 7 book is worth picking up if they already have A!C. Remember the Call of Cthulhu core rules are required to use either system.

Let me emphatically state if you have any interest in running Lovecraftian adventures during World War Two then you need to add World War Cthulhu: The Darkest Hour (WWC) to your collection.

The setup for WWC is one in which the player characters will be operatives for a shadowy offshoot of the Special Operations Executive (or SOE) run by a mysterious official known only as “N.” N will be sending the operatives on special missions to further the Allied cause behind enemy lines while also engaging in supernatural or Mythos related investigations. The duel objectives of the players’ missions can make for some really entertaining roleplaying as Winston Churchill has called for the SOE to “set Europe ablaze” while N not only looks to use the operatives to further the war aims of the British government as well as do battle with supernatural and eldritch enemies. One nice touch WWC introduces is the possibility N may not be a bastion of light and right but an evil entity only looking to further his own nefarious plans; it’s up for the Keeper to decide.

World War Cthulhu breaks down into four major sections: The Introduction, Player Resources, Keeper Information, and a campaign titled The God in the Woods. 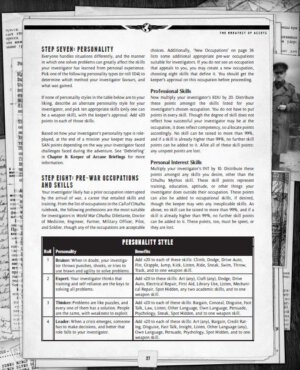 Within the introduction you’ll find the setup and core intentions of World War Cthulhu. WWC aims toward the classic style Call of Cthulhu sort of adventures with a lot less pulpy action and much more dark and brooding adventure. This is an area where WWC differs greatly from Achtung! Cthulhu as the former has more of a focus on two fisted tales of WW2 action within the backdrop of the Cthulhu Mythos running rampart throughout the world. The section also includes some sort fiction as well to help set the scene. Throughout this section and the Keeper’s info you’ll find a slew of adventure nuggets which can be expanded upon in a multitude of ways.

The player resources are what you’d expect from this section as rules for character creation are included as well as key changes to the core Call of Cthulhu character rules. Investigators in WWC will tend to be hardier and possess higher skills than the run of the mill CofC characters. These changes are put in place to increase the survivability of the characters and also accounts for additional training provided by the SOE. There are even rules for “aging up” CofC characters from the 1920s and 1930s to include them in the World War Cthulhu setting. It’s important to note World War Cthulhu is firmly entrenched in the Call of Cthulhu system of rules with some minor changes and additions. Most of these changes tend to provide the players with characters who are much more experienced and capable than a standard CofC character would begin a campaign.

One of the additions WWC brings to the table is the inclusion of personality. While the characters will continue to possess an occupation (and WCC adds a few new occupations to the mix) they also have an overall personality which should influence how they deal with objectives and obstacles during a game session. The character may be a Bruiser, Expert, Thinker, or Leader. These personalities don’t need to overly influence how a player takes the reins of their character but can provide for some Sanity benefits at the end of an adventure; a bruiser should look to tackle problems through force while a thinker might be more interested in outsmarting the opposition or seeing a problem as a puzzle to be solved through wits alone.

New skills are obviously introduced in World War Cthulhu, due to the setting, although the focus here is on covert action as opposed to characters driving tanks or devising grand battle strategies. One of the key aspects of WWC is the characters should avoid firefights and set piece battles as much as possible; organizing partisans behind enemy lines in Yugoslavia won’t be possible if the characters get blown away by the Germans the first time they encounter the enemy… This section concludes with details about covert actions and small arms tactics which will be of particular interest to players and Keepers alike. I was surprised the actual investigation side of adventures wasn’t dealt in more detail – military matters take up the great majority of page space – but this isn’t a glaring omission.

The Keeper section gets to the heart of constructing adventures in World War Cthulhu and how to best provide both a Mission Plot (the war aim of the adventure) and a Mythos Plot (what dark forces, if any, the players to contest) while also helping the Keeper prevent both plots from obviously intersecting. WWC continually stresses the point the very real horrors of the Second World War need to be kept separate from the cosmic horrors of the Cthulhu Mythos. While it could be possible to find a Nazi scientist delving into Mythos experiments or archeologists trying to unearth Mythos relics the aim of World War Cthulhu is to prevent an overarching feel that Nazi atrocities can never be blamed on any sort of otherworldly influences. Millions around the world perished because of the very human evil of the Axis forces and Cubicle 7 and the team behind World War Cthulhu approach this with respect rather than allow anyone the kneejerk out that “Cthulhu is to blame.”

New rules are introduced covering such things as ambushes, snipers, suppressing fire and the like. What is missing are rules tackling armored vehicles or aircraft and I can certainly understand the omission since the players are operatives mainly working behind enemy lines and it’s highly unlikely they’ll be commandeering a Panzer or Focke-Wulf anytime soon. Plus, player characters will be better served by avoiding any entanglements with armor or aircraft. WWC has a very tight focus and everything in the book is directed toward portraying a dark and dire world where the players are outnumbered and outgunned at every turn.

An interesting new concept introduced in World War Cthulhu is Cover. Since the investigators will usually be operating behind enemy lines they’ll need to maintain cover stories to prevent arrest and possible execution. Cover acts a bit like the SAN score but is used for the whole group rather than individually. An initial cover score will be calculated and will increase or decrease depending on the characters’ actions as well as events within the adventure or campaign. The cover value can range from 0-99 and the Keeper may call for a cover check at points where the cover story could be blown. A success on the check means the investigators can continue along their current path of action where a failure might mean someone being brought in for interrogation or the enemy becoming more aware of the partisans operating in the area.

Any gamer interested in roleplaying Call of Cthulhu during World War II needs to have World War Cthulhu: The Darkest Hour in their collection. The sourcebook is a must buy overall but for those who prefer more dark and gritty and less Indiana Jones the book is truly invaluable.