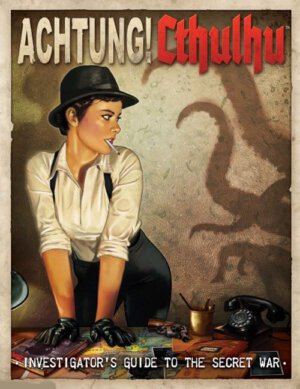 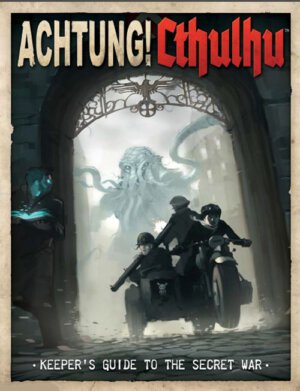 Readers know it won’t take much for me to take a look at anything related to H.P. Lovecraft, the Cthulhu Mythos, or even roleplaying games in general. While I found the first two Modiphius Entertainment releases in their WWII line of Lovecraftian adventures a bit wanting, especially Three Kings as it was not very representative of the Mythos (or even scary in my book), the company has really begun to make serious waves in the roleplaying industry over the past year or so. Recently Modiphius released further supplements to expand upon the Lovecraft cast of monsters and Old Ones as they incorporate into the World War Two era. While these aren’t the only gaming products which tackle horror and WWII (Weird Wars, Band of Zombies, and the upcoming World War Cthulhu come immediately to mind) this is the first time we begin to see a company look to bring the Mythos to a couple of especially popular outside systems: Savage Worlds and Call of Cthulhu.

For myself, I always look at roleplaying products from a GM’s perspective so rather than reviewing the Achtung! Cthulhu Investigator’s Guide and Keeper’s Guide separately I’d prefer to tackle both of them in a single review. While the first book is geared toward players and the second is obviously for those running a campaign, both books share common characteristics and styles. 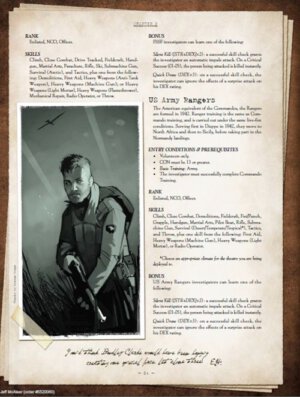 One aspect of the earlier Modiphius releases which really struck me was the high production quality of the adventures; artwork was sharp, sidebars intelligently laid out, well proofread text, and just an overall professional layout which one wouldn’t expect from a first time publisher. Thankfully that same level of professionalism is abundantly apparent with the Investigators and Keeper’s Guides. In fact Chris Birch and his team have raised the bar a touch in these new books. One small critique I have, more so in the Investigator’s Guide especially, is the lack of horror artwork as many of the graphics are more World War II related as opposed to art geared toward getting the old juices flowing to tell terrifying tales.

Let’s take a look at each of the titles:

Clocking in at 154 pages you’ll find this sourcebook chock full of information which will establish the building blocks for playing a militarily based Lovecraft campaign during WWII. The first three chapters are devoted to providing a background regarding what lead the world to war with specifics about the homefronts of Britain, France, and the U.S. While this background isn’t overly detailed, and only presents what’s in effect an overview, these chapters do provide a starting point which gamers can dip their feet into in order to prepare them for the game.

Chapter four delves into the military breakdown of the Allies. Once again this is aimed to people who really don’t have any understanding of structures of military command (Quick! Who holds a higher rank? A Captain or Lieutenant?) and is an extremely basic primer in order to introduce players to a military world. Chapters five and six delve into creating a character for Call of Cthulhu in the Modiphius setting. Obviously the 1940s are quite different than the 1920s so quite a few changes have to be made to the standard CofC character creation, as does the fact the players portray less intellectually inclined charaters, so a good portion of the book is devoted to tweaking skills to the technology of WWII and military nature of most investigators. Chapter seven is somewhat of a rehash of what you just read in the previous two chapters but now devoted to Savage Worlds. Both books do a nice job of indicating where specific info is relevant to either CofC or Savage Words. 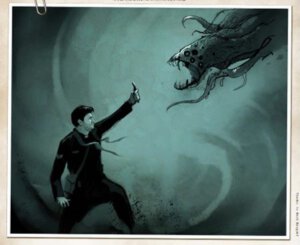 Chapter eight tackles equipment, mainly aimed at tools of destruction which can come into play, with stats for both Savage Worlds and CofC. Chapter nine really isn’t much of a chapter at all as it rehashes character creation rules from the Call of Cthulhu and Savage Worlds core books; thankfully this only consists of three pages. Chapter ten finishes up with some information to point players toward reference material to get a better feel for WWII as well as plenty of thanks for Kickstarter backers.

Visitors are pretty familiar with my history as far as Call of Cthulhu and know I’m an old school sort of GM. While the Investigator Guide includes a good amount of info for players in our modern world of RPGs, I’m still of the belief the best player guide you’ll ever run across is the person running the game. I don’t mean this as a knock on the Modephius release, as it’s a very solid RPG book, but I’m still of the mind it’s the GM who’s going to lay out the framework for players and I want to be the one setting the stage as opposed to a book my players will read. 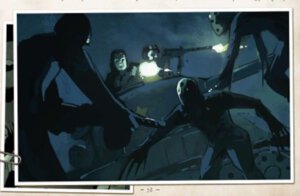 Chapter one contains a Secret Chronology of a World at War which details different events running from 1907 through 1949. While there are plenty of historical events included in the timeline you’ll also find much of the inner workings of secret cults and societies working behind the scenes in this alternate history. Chapter two details the Third Reich, both publically and within the shadows, and also provides the opportunity for players to portray German characters who are in opposition to Hitler’s plans for world wide domination.

Chapter three provides the military details of the combatants with particular attention paid to Britain, France, Germany, and the United States. These details are no doubt indispensable for GMs who don’t have a great deal of knowledge regarding how armies of WWII operated; censoring mail as an example. Chapter four looks at the real life intelligence agencies of the Allies and Germans including how to incorporate their efforts into your campaign.

Chapter five delves into fictional agencies, societies, and cults which play major roles in the shadowy realms of the European conflict. Both the British Section M and American Majestic organizations, as well as their opponents, are dealt with in detail as are smaller players in the Secret War. This chapter is especially helpful in dishing out nuggets for GMs to mine for adventuring during the period.

Chapter six covers weapons and gear Investigators are sure to encounter in their battle against the Axis and the occult. Chapter seven details stats and rule changes to the Call of Cthulhu system in order to game the WWII era. Chapter eight provides Savage Worlds GMs the ability to utilize Achtung! Cthulhu with their favorite system as well. 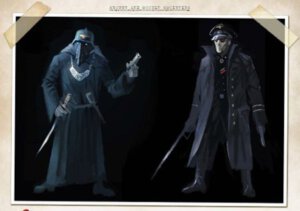 Chapters nine and ten contain arcane tomes and spells for Achtung! Cthulhu. While some of the information is already covered in CofC, a good deal of information is devoted to porting over tried and true books like the Necronomicon over to Savage Worlds. There are still plenty of new items and some especially creepy spells added into the mix too.

Chapter eleven details the Old Ones and creatures of the Cthulhu Mythos. Those nasties already included in CofC are provided a slew of stats for use in Savage Worlds as well. New beasties are introduced by way of insane cultists and diabolical Nazi scientists and flesh out the setting very nicely.

Chapter twelve includes a bunch of historical and fictional NPCs both to aid and abuse the investigators. The chapter also includes a variety of settings which will come into play over time such as the army base, airfield, university, and more.

Chapter thirteen contains ten adventure seeds to provide GMs a starting point to get adventures rolling. While these aren’t fully fleshed out adventures, each gives a good framework in which to construct globetrotting Mythos tales. I’d have liked to have seen one complete scenario included but the adventure seeds are a fine addition. 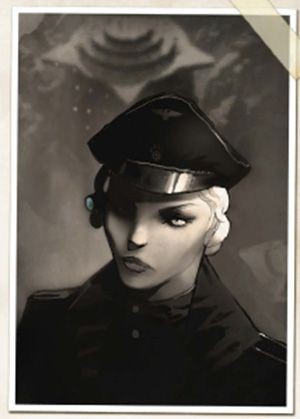 Chapter fourteen provides quick start guides for Call of Cthulhu and Savage Worlds. While not necessarily essential this inclusion is a nice touch, although I’d have thought this chapter would be found earlier in the book.

The Achtung! Chtulhu Keepers Guide concludes with a short chapter with resources GMs can turn to for inspiration including classic movies like The Maltese Falcon, television shows such as The World at War, and a library shelf worth of books. Even web links and other roleplaying products are included in the listings too.

As I earlier mentioned, the Achtung! Cthulhu Investigators Guide is a fine roleplaying product but one in which gamers might look to as a luxury in playing the setting. The Keepers Guide, on the other hand, is a fantastic resource for any self-respecting Cthulhu game master. Both books are chock full of detailed information, clearly laid out in order to dive right in, and should be picked up as a bundle. As you can get both titles in PDF format there really is no excuse not to grab both guides. If you prefer your gaming tomes in hard copy I may recommend getting the Keepers Guide first and then deciding if you want the additional info for the Investigators Guide. It’s also important to note the characters utilized in the system are mainly military or intelligence types so if you’re looking for more non-combat or spy type adventurers you may be a bit disappointed.

I have to say I’m pleased with the two source books from Modiphius Entertainment and, while I might look to run a WWII themed Mythos campaign with less militarily minded investigators, anyone who has a hankering to delve into Lovecraftian horror during the greatest conflict in human history would be greatly remissed if they don’t snatch up Achtung! Cthulhu.

I have to say I’m pleased with the two source books from Modiphius Entertainment and, while I might look to run a WWII themed Mythos campaign with less militarily minded investigators, anyone who has a hankering to delve into Lovecraftian horror during the greatest conflict in human history would be greatly remissed if they don't snatch up Achtung! Cthulhu.