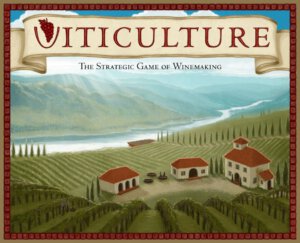 In Viticulture, the players find themselves in the roles of people in rustic, pre-modern Tuscany who have inherited meager vineyards. They have a few plots of land, an old crushpad, a tiny cellar, and three workers. They each have a dream of being the first to call their winery a true success.

The players are in the position of determining how they want to allocate their workers throughout the year. Every season is different on a vineyard, so the workers have different tasks they can take care of in the summer and winter. There’s competition over those tasks, and often the first worker to get to the job has an advantage over subsequent workers.

Fortunately for the players, people love to visit wineries, and it just so happens that many of those visitors are willing to help out around the vineyard when they visit as long as you assign a worker to take care of them. Their visits (in the form of cards) are brief but can be very helpful.

Using those workers and visitors, players can expand their vineyards by building structures and planting vines (vine cards) and filling wine orders (wine order cards), players work towards the goal of running the most successful winery in Tuscany. 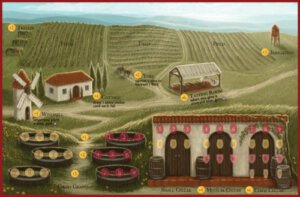 Ah yes… by looking at the box you can obviously tell Viticulture is a sweet, relaxing game to while away a bit of time, right? You may think that but once you open the box, and sit your friends around the table, you’ll find a much more competitive game than you expected. I won’t say you’ll reach a point where I’d call it a real cut throat game but there certainly is a focus to prevent your opponent from achieving their goals almost as much as you look to complete your own.

Two to six players take on the roles of proprietors of small vineyards in the Tuscany region. All you have at your disposal are a wee bitty wine cellar, a crush pad, three plots of land, three lira coins, a random Summer visitor card, a Pinot vine card, and three workers. You don’t have much to work with at the start but you’ll soon remedy that.  The object of the game is to gain twenty victory points, which equates into having the finest winery in the region.

Each round is broken into the four seasons as well as an end of year phase. Depending on the time of year will determine what actions you’re able to perform with your workers. In the first phase, Spring, each player will select what order they’ll want to play throughout the rest of the year. Choosing to go earlier (placing your Rooster on the Wake Up Call) allows you the advantage in worker placement but choosing to go later scores you benefits up front. Each season will call for specific actions which you can place your worker tokens (each worker can only be used once per year) to perform. Much of the time you’ll be juggling the tasks of improving upon your vineyard, using Visitor cards effectively, planting and harvesting grapes, and more. All while doing your best to preventing the other players for doing those very things. 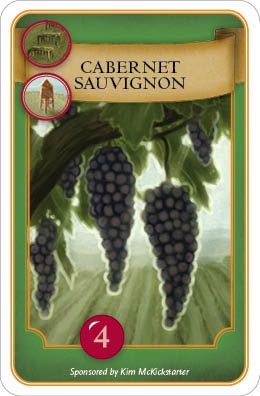 The game does take a couple rounds or so to really get moving, mainly because you don’t have much cash to work with, but soon starts to kick into gear. Players will find plenty to occupy their attention as there’s always enough for each player to ponder in a given season. Do you focus on Summer to improve your vineyard by building structures? Give tours? Plant new vines? Or will you look to Winter in order to train new workers, crush grapes, or sell wines? Your place in the order can have a lot to do with success but going later in a phase isn’t a huge disadvantage for anyone. Not everyone will be able to perform the same actions every season so you have a balancing act of getting your worker on the task you need while also blocking the other players from taking care of their own business. Each of your workers are only available to do one thing each year so clever deployment is called for.

There are enough ways to approach gaining victory points to allow for different takes in strategy so you don’t have to tackle Viticulture exactly the same way every time and this leads to a lot of replayablity since players will want to experiment with different play styles. Of course, there’s plenty of randomness due to the cards you may have available at any time so even the most detailed gameplan can lead to a second place finish. Thankfully, while it does come into play, Viticulture certainly isn’t just a luck fest where a bad turn of a card leads to defeat.

Folks already know I’m not enamored by many Euro-style games; most usually leave me a bit cold but Viticulture is a title that breaks that mold as players stay involved with each other throughout the game. This isn’t to say you’ll have inter-player diplomacy or negotiation, as everyone does their own thing, but at least you don’t feel as if you’re playing in a vacuum. Gamers who don’t like a bit of “take that” on their table top probably will have a gripe with the amount of blocking and challenging your opponents but I think this is great fun!

I’m sure comparisons to Agricola or Stone Age will be made but this isn’t simply a knock off of the uber-popular German titles as there’s enough different in this worker placement game to stand on it’s own. Viticulture takes a play or two before you get a good feel for how everything ties together, and the rules could be better organized, yet it’s probably a lot easier for the casual gamer to pick up and play than Agricola. You’ll still find a great amount to mull over during a game of Viticulture so I don’t comparisons to Agricola or Stone Age would be fair, to any of the games; outside the fact they’re all worker placement games each stands completely separate on it’s own. 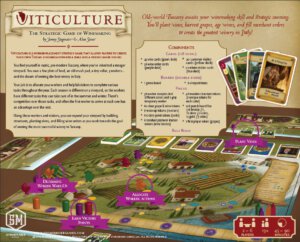 It’s important to note the components are excellent. From the multitude of wooden tokens of all styles and shapes, to the sublime artwork, to the cards and board everything in the box is very nicely done. You can see Stonemeier Games had a real plan in place when they launched their eventually successful Kickstarter. The rules could have been a bit better organized and it isn’t always apparent what might be your best plan of action at a given time until you have a handful of plays under your belt.

Viticulture is an excellent game, although there are a few other minor items to mention. First is the theme itself. This isn’t to say the theme feels tacked on, or anything of the like, but the serene artwork and low impact subject matter of wine making seems a wee strange to be tied to such a highly competitive game. It’s certainly not a deal breaker but comes across odd none the less. Also the game plays much better with a full complement of five or six players as opposed to only two. You’ll find a lot more depth to the design when you’re going up against four or five opponents while a two player game may be a bit of a let down after having the whole gang at the table.

If you’re looking for a fine evening of interesting gameplay and decision making, and don’t mind a little confrontational action, Viticulture should definitely be on your game shelf. The style isn’t too cut throat and the game is easily suitable for family game night with younger teens. I really think you’ll enjoy your time as you look to sell the finest vino in Tuscany.

If you’re looking for a fine evening of interesting gameplay and decision making, and don’t mind a little confrontational action, Viticulture should definitely be on your game shelf. The style isn’t too cut throat and the game is easily suitable for family game night with younger teens.