Smash Up Awesome Level 9000 is an expansion for AEG’s shuffle building game Smash Up which was released and then quickly sold out at last year’s Gen Con. I’m not going to rehash to original game as you can take a look at the review right here but rather focus on what Awesome Level 9000 brings along to the title. 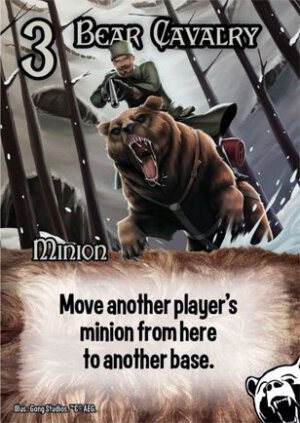 Included in the expansion are four new factions, as well as their bases, along with a new play mechanic: talents. Talents allow your minions a special ability which can be used a single time each turn as a free action. The factions themselves are Bear Cavalry, Ghosts, Killer Plants, and Steampunkers. Of course each brings a unique style of play which is augmented by whatever other faction (meme) you choose to shuffle it up with.

Bear Cavalry – Sporting a Napoleonic Russian theme these are pretty big and bad and especially effective in knocking your opponents off a base.

Ghosts – Not very powerful straight up but they become much more useful, and increase in strength, the fewer cards you have in hand.

Killer Plants – Best grab some Weed-B-Gone because the longer these stay in play the tougher they become.

Steampunkers – They bring modifications to bases so much of their appeal is to improve units already occupying a base. 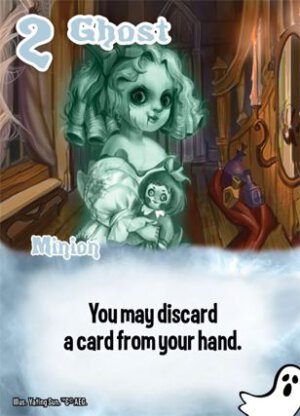 I like the fact even with the inclusions of some Talents the new factions don’t throw off the balance of the game in favor of using the Awesome 9000 memes as opposed to sticking with your tried and true minions from the base game. What you’ll find in the expansion are some interesting new ways to play (and chew over in Smash Up deck experimentation) without ruining the core Smash Up experience; I’m sure you know what I’m talking about when I say sometimes an expansion brings so much radically different to the table it in effect drains the fun of the original game.

As with the original game the artwork in Awesome 9000 is great and I especially love the images used with the Bear Cavalry and Steampunkers. Card quality is good although, as with any card game which is going to see a lot of use, I always recommend that small investment into protective sleeves to cut down on wear and tear. This is by no means a knock on the component quality at all but simply my personal preference.

Awesome Level 9000 is just that; an awesome addition to Smash Up folks have been waiting for since the original release. We already know other expansions are on the horizon and, like many other people, I can’t wait to see them!

Awesome Level 9000 is just that; an awesome addition to Smash Up folks have been waiting for since the original release. We already know other expansions are on the horizon and, like many other people, I can’t wait to see them!