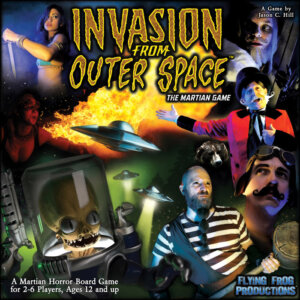 Invasion From Outer Space, The Martian Game is a fast-paced game of fiendish Martians, Big Top Heroes, and Sci-Fi Movie Action. Players take on the role of either the Carnival Heroes, using their special talents and working together to fight off the Martian Invasion; or as the invaders themselves, waves of Martian Soldiers and Flying Saucers, blasting Humans with Ray Guns and unleashing their vile alien technologies upon the Earth.

Featuring a modular game board, eight Carnival Heroes to choose from (such as the Fire Breather, Strongman, or Jo Jo, the Dancing Bear), an army of Martian Invaders (including Martian Champions such as the dreaded Zard Beast), dynamic new game mechanics like Fires breaking out and Crowds of helpless civilians running in terror, and several different Scenarios to play that drastically change the game; Invasion From Outer Space is designed to create a cinematic feel as the story and game unfolds.

Invasion From Outer Space is built using the Last Night on Earth game engine, so the two games are compatible. Players can now have their Martians invade the small town of Woodinvale, Zombies attack the Carnival, or even play a massive game with up to three independent factions (Heroes, Zombies, and Martians). The possibilities are endless. So drop those roasted peanuts, strap on your jumpsuit, and step into the spotlight…the Martians are coming and the Invasion From Outer Space has begun! 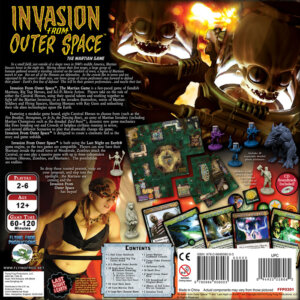 are unleashing their unbridled aggression upon an unsuspecting populous. One or two players will take on the role of the invaders, and the remaining players are the humans forced to deal with this menace from space.

Luckily, these aren’t your everyday, run-of-the-mill humans though. The Martians decided to begin their invasion at the local carnival, and didn’t count on facing Carl the Strongman or Cassidy the Trickshooter. Even JoJo the Dancing Bear isn’t happy about these Martians, and is headed out to do some damage.

The game features the same game engine as Last Night on Earth, the Zombie game from Flying Frog, and can actually be combined with LNOE for an epic Zombies vs Martians vs Humans kill-fest. The Martians have a few more tricks up their sleeves than the zombies do though. So if you have found playing the zombies in Last Night on Earth a bit boring, try playing the Martians in Invasion from Outer Space.

The components are excellent and all very shiny with live actors starring as the characters in the game, as is the standard with Flying Frog’s offerings. The cards are actually so glossy that they stick together and will need some use to get them to feel right, but again this is no different than any of Flying Frog’s other games. The figures are well done and detailed with multiple sculpts for the Martians. They even have little clear plastic helmets that you glue on their heads. Martians obviously don’t take well to Earth’s atmosphere. Aside from the Martian and player figures, there are two additional figures. The Zard Beast and the Martian Leader. These are formidable foes that the Martian player can bring to bear via the use of their Command Console.

The Command Console is what makes playing the Martians so much different, and better, than playing the zombies in Last Night on Earth. Each turn the Martian player (or players) get two command points to spend on their Command Console, which is a small board that has several different available actions on it. You could spend one point to move one of your flying saucers two spaces. The flying saucers are the landing points of the Martians, and it is possible to move these about during the game in an attempt to harry the Carneys into a corner. 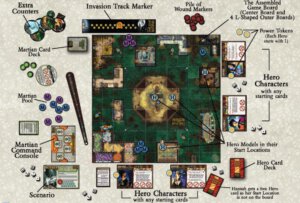 You could also spend a point to draw a card from the Martian deck, or you could spend two points to immediately call up to three reinforcement Martians and place them at any landing point you wish. There are some cards called Martian Tech cards in the deck, and these need to be built by the Martians by first drawing the card itself, and then adding points to it over several turns in order to build the tech itself. The Martian Death Ray is one of the deadly techs available to the Martians fired directly from their flying saucers.

The most potent space on the Command Console is the ability to call a Martian Champion. In the basic game there is only the Zard Beast, and the Martian Leader is available in the advanced game. These work in a similar way to the Martian Tech cards, as it will take you several turns to assign enough command points to actually summon one of the champions. Unlike the wimpy Martians, who can be killed with a single hit, it takes multiple wounds to kill one of the champions, and they have other attack bonuses as well to make them truly formidable foes.

The board is modular and similar to LNOE in most respects, but instead of the town of Woodinvale you see the buildings and tents of a traveling carnival, including the Big Top, the Lion Tamer, the Ferris Wheel, and everything else you might run across at the carnival.

The game comes with several different scenarios, with different winning conditions for the Martians and the Carneys. You might need to shoot down some of the flying saucers, or stop the evil Martians from abducting enough people to advance their nefarious plans. In the basic game, your goal is simple. It is an invasion and the players need to kill twenty Martians in order to win. The Martians in turn only need to kill two characters to win the game. You have but thirteen turns to accomplish one or the other. The number of turns per game varies depending upon the scenario that you are playing, so you’ll have enough time to accomplish your goals in the more difficult scenarios.

In our very first game, things were looking pretty good for the heroes. They had killed thirteen of the Martians with no heroes killed, and were well on their way to victory. Cassidy the Trickshooter was the main dealer of death to the Martians, as she starts the game with a “Brace of Pistols”. Ranged weapons come in very handy for the heroes, especially when the Martians are all traveling in full packs of three each.

Unfortunately, Hannah the Firebreather and Angelica the Bearded Woman let themselves be maneuvered into a bad position and 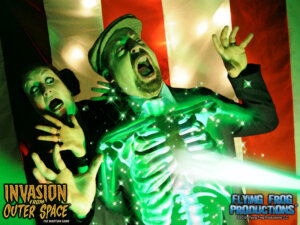 found themselves surrounded by five packs of Martians. When all of the fighting was done, Angelica escaped but Hannah lay dead. Her firebreathing days done. Then, the Zard beast arrived, and things began to look grim for the heroes.

Luckily, Hannah was replaced by Jojo the Dancing Bear, the most ferocious fighter on the fairgrounds. Players get to pick new heroes randomly if their hero is killed, so there is no player elimination. Jojo set off to tackle the Zard Beast, and the remaining characters decided to band together to repel the invaders. Cassidy gave one of her guns to Archibald the Human Cannonball, and they set up outside the fire wagon to give Hannah a chance to search for a weapon.

The battle between Jojo and the Zard Beast was fierce, but the beast proved to be too much for the bear. In truth, the Zard beast is too much for any single hero. A valuable lesson learned by the players. Jojo was forced to run, but managed to kill a few more Martians along the way.

Now the Zard Beast was free to attack the group of heroes holed up by the fire wagon. The heroes fought valiantly, but the dice were against them. Swarming Martians managed to zap the already injured Archibald with their ray guns, and then the Zard Beast stomped in, crushing two Martians in its efforts to reach the heroes. It grabbed Archibald, and ripped off his head with its massive jaws, tossing his lifeless body to the ground and securing the win for the Martians. The heroes had managed 18 kills, but it wasn’t their day.

The advanced game introduces new rules covering fires spreading thru the carnival, explosives, attacking and defending crowds of scared carnival-goers, and the powerful Martian leader. These rules are used with the other scenarios and they can be quite fun. There is nothing like the satisfaction of blowing a saucer out of the sky with a cannon and watching it crash into a pack of Martians, or watching a death ray blast across the board.

I’ve always liked Last Night on Earth, and Invasion from Outer Space does it one better. It is a fun game with different strategies to pursue and entertaining scenarios to explore. I wish that the saucers were actual models, it isn’t necessary but it would be cool. It would also be nice to have a summary sheet for the advanced rules and their associated modifiers. I found myself having to look up rules a lot because of the different modifiers that you need to remember to apply.

Overall, Invasion from Outer Space is a good time. I love the fact that the last few pages of the rulebook tell you how to combine the game with Last Night on Earth so that you can play with zombies and Martians. Plus the included CD soundtrack adds a nice touch of atmosphere.