A summons from Geb himself inadvertently puts the party back on the trail of Chancellor Kemnebi in The Ghouls Hunger, the fourth chapter in the Blood Lords Adventure Path.

The Blood Lords Adventure Path, much like the nation of Geb and its undead ruler, is at its best when it’s having a bit of fun with itself. Its very premise —a country named for and ruled by an undead king who has grown bored and detached in his undeath— requires either a deft hand for horror or a commitment to the bit in the form of some thoughtfully-applied camp; thankfully, The Ghouls Hunger takes the second approach.

Like the Strength of Thousands Adventure Path, the Blood Lords Adventure Path combines an interesting mix of challenges with a strong underlying plot and ties the whole package together with chapter-spanning diplomacy and maneuvering — the real element that “sells” the campaign, however, is the integration of the setting, Thrust into Geb’s aristocracy, player characters must wheel and deal in order to further their goals and keep one step ahead of their enemies. As the newest Blood Lords, they must quickly ascertain the lay of the social landscape while continuing their investigations, clearing their names, and fulfilling their duties as the honor guard of Kortash Khain a high priest of Kabriri.

The Ghouls Hunger offers a hefty dose of social maneuvering along with some dungeon crawling and outright combat. Player characters can also pursue individual goals in their downtime, though the variety of tasks on offer and the ability to flavor them makes this feel like an activity much more rooted in the world than the research downtime activities from Strength of Thousands. Players can extort NPCs, establish minor factions, further or sabotage faction goals, and more. These self-directed activities are well-placed to impact the characters’ reputations in Mechitar and to allow for some more character- rather than conspiracy-driven roleplaying moments.

The potential standout here, though, comes early in the chapter as the player characters must perform a processional in the hopes of attracting Geb’s attention. No matter that Geb himself summoned the player characters in the first place or that, given his general ennui at his undeath, he seldom deigns to pay attention to anything or anyone. Leaving players with broad tools such as themes, exhibits, pageantry, and revelers opens the door for some standout moments.

The supplemental information included on Kabriri offers GMs plenty of fodder for later campaigns or additional side encounters and even includes a sidebar on the other creative works which have influenced the adventure’s particular take on ghouls. While some influences, such as that of HP Lovecraft, will be obvious, others will take readers by surprise; either way, the insight into the creative process isn’t one readers are often afforded and this small peek behind the scenes will delight those interested in the craft of worldbuilding.

The Ghouls Hunger offers a smart blend of structured challenges while allowing player characters agency in developing and acting on their own plots. While this may cause some inter-party friction, determining on how united player characters are in their faction allegiance, it also encourages creativity and character development. On the whole, the package feels like a more fully developed version of what made Strength of Thousands so compelling, albeit it in a much darker package. Players and GMs alike are certain to leave “hungry” for more as they continue to unravel Kemnebi’s conspiracy.

Sami Yuhas
Writer, gamer, and necromancer bard (at least in D&D). Sami focuses primarily on board and tabletop gaming, with a focus on sci-fi and fantasy, as well as worker-placements and co-op titles. She prides herself on the ability to overthink world building in games, and cites a three post manifesto on the costuming of XCOM 2 as among her greatest nerd achievements.
Latest posts by Sami Yuhas (see all)
Tags: James Jacobs, Leo Glass, Paizo Inc, Pathfinder, Pathfinder Blood Lords, Pathfinder The Ghouls Hunger 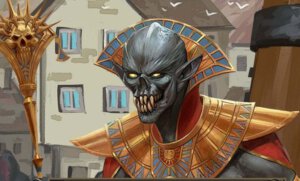 The Ghouls Hunger offers player characters a smorgasbord of structured and self-driven challenges in an adventure that nicely balances its own contained plot with the broader story arc.
8
Good