The Lost Omens Travel Guide cracks open the toolbox to offer GMs and players a plethora of new storytelling opportunities and wraps it all up in a fun and engaging framing device.

The title of “travel guide” is undeniably fitting as the book is written as an installment of the in-universe Golarion’s Finest series — specifically, Golarion’s Finest Guide to the Inner Sea. Each chapter, then, is written by a different in-world contributor, adding flavor, interest, and plenty of entertainment value.

Rather than focus on places or geographical detail, the Lost Omens Travel Guide instead digs deeply into culture and history, including everyday life, fashion, cuisine, architecture, and even the stars themselves. Whether it’s the Absalom Time Exchange —a kind of Rosetta Stone for more than 50 calendars, some otherwise completely lost to the ages, or the typical design of an urban home as opposed to its rural counterpart, the Travel Guide offers extensive lore and worldbuilding in a format that is wonderfully readable.

The multi-author concept, driven by a real multi-author team, allows players and GMs alike the opportunity to access a variety of perspectives they may not have previously considered, enabling the book to cover topics in a way many others can’t. For example, on the matter of adventurers entering small, rural villages, the guide notes that “too much money entering a place too quickly can end up wrecking the economy” and that the arrival of an adventuring party means “it’s pretty safe to assume there’s going to be some amount of violence and property damage.” These aren’t the kinds of things most GMs or players consider in the heat of the moment, yet they’re precisely the sort of worldbuilding nuggets that form the bedrock of memorable GM-created locations and encounters. Rather than doling out pre-generated hooks —which can certainly be a wonderful format— the Lost Omens Travel Guide expands the structure of the existing world to allow GMs to build narrative from the breadcrumbs, cracks, and implications created by the text.

The art is as striking as ever, replete with small details that help sell the world. One particular standout is the section on festival fashion and traditions. These pieces are particularly engaging and help the world to feel more fully embodied, adding in the kind of detail a scenario book simply wouldn’t have room to include. However, with the travel guide conceit, some extra flavor in the page art might have elevated the experience, much like it did with Book of the Dead. Overall, however, it’s a truly minor complaint in an otherwise strong offering.

The Lost Omens Travel Guide combines a clever framing device, engaging writing, and beautiful art in a worldbuilding treasure trove that will engage both GMs and players. The Travel Guide helps to fill in details that round out the world and offers new opportunities for storytelling and character building. Though the immediate draw is for those interested in telling stories within the setting, the Lost Omens Travel Guide is a masterful and entertaining demonstration of diegetic writing for anyone interested in crafting a world.

Sami Yuhas
Writer, gamer, and necromancer bard (at least in D&D). Sami focuses primarily on board and tabletop gaming, with a focus on sci-fi and fantasy, as well as worker-placements and co-op titles. She prides herself on the ability to overthink world building in games, and cites a three post manifesto on the costuming of XCOM 2 as among her greatest nerd achievements.
Latest posts by Sami Yuhas (see all)
Tags: Paizo Inc, Pathfinder, Pathfinder Lost Omens Travel Guide 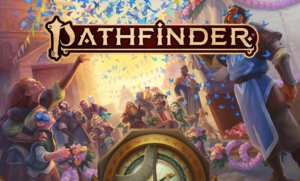 It’s time to plan your trip through the Inner Sea region with the Lost Omens Travel Guide — and dig into some delicious worldbuilding!
9
Excellent