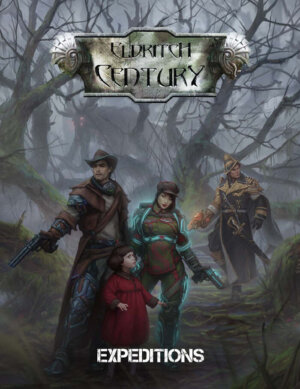 MSRP: $32.50 for the PDF (includes both the Expeditions corebook and Almanac); $89.99 for the printed slipcase set of both books; $59.99 for each book, if bought separately

Eldritch Century is a Kickstarter backed roleplaying game that was launched in 2019 and first became available to the public in late 2020. It is based on the universe created by Daniel Servitje and Rubén Bañuelos. The core game is broken into a two book set. The first book is Expeditions which functions as a player’s handbook, and the second is Almanac which includes the setting and monsters. You cannot buy the books separately at the time of this review. The book has plenty of evocative of artwork to get the imagination going. Overall, the artwork is strong.

The game seeks to capture the feel of a pulp, super science setting reminiscent of Cthulhu, Bioshock, Fallout, and Annihilation with its modified version of the 5e system called the Draco System. Groups are free to ignore the Draco System and simply use the 5e system if they so choose. The Draco System uses the typical D20 mechanic and separates defense from armor. The defense is how hard it is to hit, but armor decreases the damage by its rating. Character gain talents (feats) which can be either active and passive. Powers (spells) and active talents use 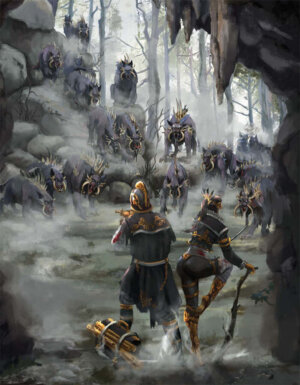 action points. Action points can be used for active talents or to alter the effects of spells to include duration, distance, targets, etc. These are positive changes to the D20 system rather than keeping track of spell slots.

The game is set in an alternate history that diverged in 1918. A Miasma engulfed the American expeditionary force and stopped the great war. The Miasma continued to expand throughout Europe engulfing the continent and trapping those inside over the succeeding decades. The Miasma warps and changes everything within it, and it manifests nightmares and fears of those who enter.

The world is split into 6 competing factions that seek to push back the Miasma. The Atlanteans, Axumites, Nisshoku Teikoku, Oceanic Community, Renascent Hegemony, and Sino-Siberian Mandate. Players are assumed to start in 1984 nearly seventy years after the Miasma first appeared. Unfortunately, the majority of background information is in the Almanac so the GM will be required to inform the players of common knowledge without revealing any faction secrets. The information about the factions in Expeditions is tied mostly to the character classes.

Character creation is fairly detailed and it assumes characters are above average. Players may use either point buy or roll for their characters’ stats. Players will start by identifying their characters traits, faction, and training. Then players will select a Path (character class), a personality, origin, and background. Each of these selections will determine attribute bonuses, skills, talents, and hit points. Each faction has unique backgrounds, talents, paths, and origins. Characters will have slightly higher stats than their equivalent 5e counterparts, and the same will be true of skills. General feeling is this is a bit bloated for character creation and light on the powers.

The Expedition chapter on equipment is well done. The system has replaced tracking money with a resource check rolled against an equipment DC. It is a simple and elegant system that reduces bookkeeping. Armors and weapons have upgrade slots to make them unique and tailored to play style. There are unique items, services, and typical items to round out the chapter.

The basic rules section will be familiar to those who play 5e systems. There are some minor changes that

particular to the setting such as Miasma effects. The rules for Miasma and Minerva talents should have been moved to Almanac to allow those to be revealed overtime, but these are minor issues.

The weakest section of Expedition concerns vehicles because the mechanics have vehicles being relatively squishy. The vehicles range from your typical cars all the way up to battleships, there is even a mecha with 6 pilots. The number of weapons on the larger vehicles go up to about 20, but the damage is low per shot. They seem to detract more than add to the mechanics and even the game talks about ways to use vehicles in the Miasma. It felt like this section should have been moved to the Almanac as an optional rule set.

There is a small gamemaster (GM) section, but it is bare bones. First time GMs should seek additional sources on how to run a session GM, set up adventures, and for telling stories. It feels that the writers assumed more experienced gamemasters would take this up as an alternate second game. It should have been included in the Almanac for this target audience rather than the players.

It is a strong entry for those who like 5e rules and are seeking an alternative setting. The biggest complaint is having much of the common knowledge of the setting put into the Almanac which is intended for the gamemaster’s eyes only.