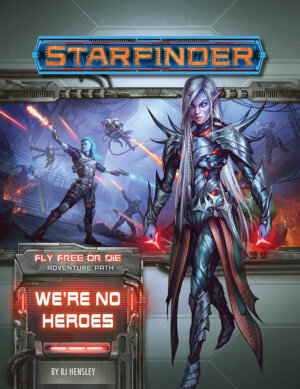 We’re No Heroes is not an earth-shattering entry in the Starfinder or tabletop gaming canon — and that’s okay. As the first of six chapter in a near operatic tale of rags, riches, and revenge, it’s a story that knows the tropes and delivers a satisfying execution.

Designed for four level one or two characters, We’re No Heroes finds players toiling away from the Evgeniya-Jaimisson Corporation, a soulless enterprise thriving off exploited labor and expendable employees. Players choose from one of eight background templates, each with its own tie to a major recurring character in the larger Fly Free or Die Adventure Path. Combined with the low level start point, this makes the scenario a great option for onboarding players who are new to the system and world. The built-In connections provided by the backgrounds help facilitate character development, support immersion in the roleplay, and help to ensure that all characters get a moment in the narrative sun.

After being hired to deliver a shipment of Yaro berries for a retiring grocer, players soon encounter trouble in the 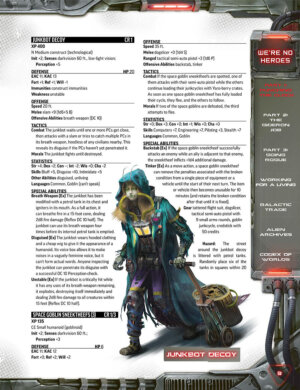 form of space goblins eager to make off with the cargo, kicking off a series of unfortunate and ever-escalating encounters. The adventure’s structure is such that players can feel secure in testing their mettle in both skill checks and combat, thanks to a difficulty curve that slowly but steadily increases. A failure to fix a datapad early on has virtually no consequences, but yields a nice chunk of experience; players who approach play with an open-mind and a willingness to explore will have no trouble finding character growth opportunities.

The adventure likewise provides solid support for new GMs, offering scripted responses to any number of character decisions, as well as optional events to sprinkle in. The descriptive text is hearty enough to be read as-is, though author BJ Hensley has still left room for improvisation. Strong guidance is offered on how to introduce NPCs and, as always, these introductions are paired with beautiful illustrations.

Each of the adventures in the Fly Free or Die Adventure Path offer moments of moral choice with the promise of payoff (or payback) down the line. While it’s always satisfying to see a campaign explicitly include consequences for the good or bad characters have wrought, the execution can be tricky; yes, you can place Chekov’s metaphorical gun on the wall, but can it be exploded at just the right moment and in just the right way? Though it’s too early to tell, the hooks established in We’re No Heroes certainly open the door for narratively meaningful boons or banes.

Ultimately, while We’re No Heroes won’t be a must-own for every Starfinder fan, the adventure is a wonderful option for those new to the system. A well-executed, if familiar, premise and strong support for new players and GMs alike yield an experience that feels like playing through an episode of Firefly and gives players a reason to care for the story still to unfold.

TGG REVIEW
8 TGG SCORE
0 VISITORS' SCORE (0 votes)
Summary
Offering a fun execution of some of sci fi’s favorite storybeats, We’re No Heroes is an enjoyable introduction to the Fly Free or Die Adventure Path, perfect for newer players and GMs.
REVIEW SCORE
What people say... Leave your rating
Sort by: