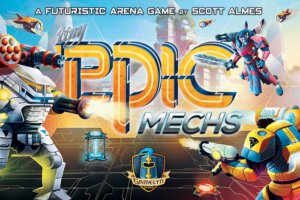 Number of Players: One to four players

I share my thoughts about Tiny Epic Mechs, designed by Scott Almes, from Gamelyn Games. In the game, players are competing in a future arena filled with power armor, basic and advanced weapons, a mighty mech, and more. Does the game warrant its rather lackluster reputation? You’ll find out.

2:07 Taking a look at and breaking down Tiny Epic Mechs
21:32 Final thoughts and review score
TGG REVIEW
7.5 TGG SCORE
0 VISITORS' SCORE (0 votes)
Summary
While Tiny Epic Mechs might not be my favorite of the Tiny Epic line it's still a good game and plenty of fun to play. Sure, the combat feels a little anti-climactic but the game certainly isn't as bad as some reviewers have made it out to be. The Gang and I had fun and I think if you dig the theme and programmed action games you should enjoy it as well.
REVIEW SCORE
What people say... Leave your rating
Sort by:

Dungeon Drop | Review and How to Play