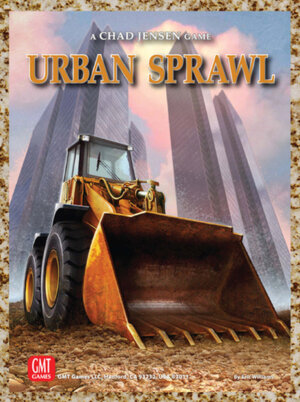 Having lived most of my life in Chicago, I understand the concept that urban development can be a cut-throat proposition – never for a moment think any great metropolis was built with a lot of hand holding and singing of Kumbayah… Nope, it was a dog fight all the way and Urban Sprawl brings that dog fight to your gaming table.

I’ll begin by pointing out that Urban Sprawl certainly isn’t for players who aren’t used to a little mental heavy lifting. This isn’t to say that Chad Jensen’s latest design is a difficult game to understand or come to grips with but it will require thought and, maybe more important, paying attention. For those who enjoyed Jensen’s previous design, Dominant Species, Urban Sprawl will be right up their alley. On the other hand, if you play with folks who spend as much time texting friends as they do planning their next move, you may want to shy away from the title. Or, better yet, find a group who are a bit more serious about their gaming.

The components are of typical GMT high quality and the rulebook makes grasping the concepts in use fairly easy to understand. Sure, due to the heft of the game there were some sections that needed to be reread but for the most part it made sense after a few run throughs.

The object of the game is to be the person with the highest Prestige when the Olympics are awarded to your thriving metropolis. Prestige is mainly earned through construction and possession of buildings, but vocations, elected officials, and events come into play as well as the game progresses.

As far as a quick run through, players each receive Action Points to use each turn (with a maximum of six) in which to purchase permits and contracts that allow them to build various blocks of any one of four types: Civic, Residential, Industrial or Government. There is also a fifth type of block to be developed and that is the Parks. Though Parks can only be placed by the person who is Major. These buildings aren’t free though so you’ll have to have permits, a contract, and cash. You have to play an equal number of permits of the proper zone type shown on the contract. Each building site has a cost and this is calculated by adding together the number on the Wealth row and Prestige row of the site you’re building on, hand over that total in cash and claim it for your own.

The process is actually much easier than you think. 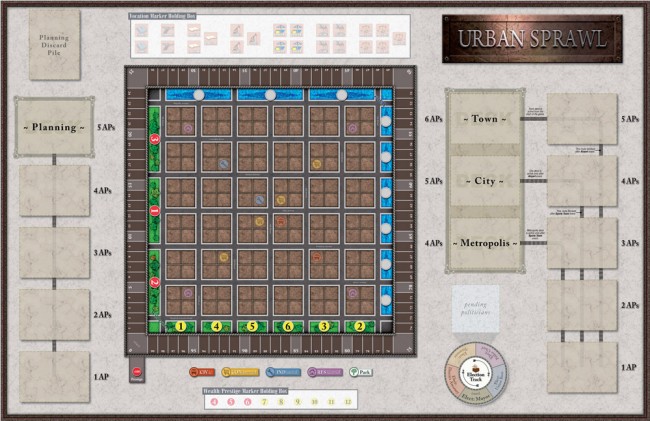 Hopefully, these buildings will provide Wealth and Prestige points as the game continues. There are also cards sprinkled throughout the decks that also trigger a payout phase where players receive bonus Wealth or Prestige based on the number of buildings controlled in a particular row. Nothing is ever set in stone though as Events can aid or hamper players and there’s always the risk of someone engaging in Urban Renewal thus tearing down one of your cherished buildings and replacing it with one of their own.

As the game progresses you’ll utilize one of three decks: Town to begin, then City, and finally Metropolis. Each deck provides for bigger and more impressive (no doubt more valuable) buildings.

Also, each player will eventually hold some form of public office, although until the Airport comes into play from the Town deck there is only the Mayor. Once your wee town has that Airport you’ll have the positions of Police Chief, District Attorney, Union Boss, and Treasurer coming into play. Each of these positions will provide bonuses and the Mayor at the end of the game will receive a nice Prestige bonus for each of the lovely parks that have been laid out throughout – no doubt by their predecessors…  Players will be elected to the various positions based on random Elections that take place through card draw. Each Election will be different as determined by the card in play. 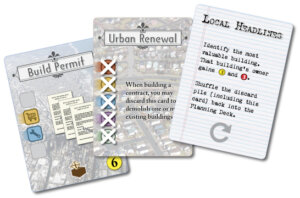 There are Vocations as well on certain cards and they will provide additional bonuses as well.

All in all gameplay breaks down into gaining permits and contracts, building, sticking it to your opponents by tearing their buildings down, earning bucks and then rinsing and repeating. Once a few turns are under your belt you get the hang of additional concepts such as zoning rules, neighborhood bonuses, and such. There’s a lot under the hood but most players will be able to wrap their heads around everything in the game.

It’s important to note that some players won’t like the confrontation that takes place in Urban Sprawl; it’s every man and woman for themselves and you’ll only succeed if you’re willing to stick it to the other players from time to time. I don’t mind that aspect at all but I thought I should make mention of the fact. You also need to stay on your toes by keeping a plan in your head but staying open to flying by the seat of your pants as fortunes can change with a flip of a card or opponent pulling a fast one!

Overall all, Chad Jensen has hit yet another design out of the park with Urban Sprawl. It’s a good meaty game that keeps players involved throughout. Downtime is minimal because, once players understand the rules, each player’s turn is only a couple of minutes or so. You’ll be watching their moves and planning your own anyway so the time will quickly pass. Urban Sprawl is a longer game that will take around an hour and a half with two players and probably three hours or so with a full compliment of four players. Obviously add time to that estimate the first time or two playing.

I can see Urban Sprawl making its way onto many best of 2011 lists (including our own) even though I’ll guess there will be gamers out there who don’t “get” the design the first time they play. For myself, I think Urban Sprawl is a fantastic game and a must have for serious gamers everywhere!

TGG REVIEW
9.5 TGG SCORE
0 VISITORS' SCORE (0 votes)
Summary
Chad Jensen has hit yet another design out of the park with Urban Sprawl. It’s a good meaty game that keeps players involved throughout. Downtime is minimal because, once players understand the rules, each player’s turn is only a couple of minutes or so. You’ll be watching their moves and planning your own anyway so the time will quickly pass.
REVIEW SCORE
What people say... Leave your rating
Sort by: