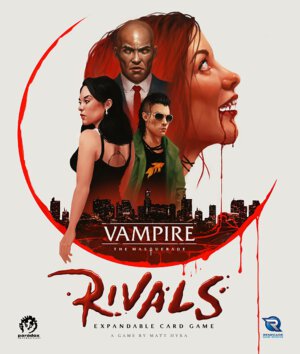 I settle in to share my thoughts about the new Vampire: The Masquerade card game, Rivals, from Renegade Game Studios. The game is for two to four players, ages 14+, plays in 30 to 70 minutes, and carries an MSRP of $45.00. Is this expandable card game perfect for gamers regardless of their investment level into VtM? Of would you have to be a diehard Vampire: The Masquerade fanatic to even consider adding this to your collection? You’re going to find out!

You can check out the card list for each deck right here.

01:34 Taking a look at Vampire: The Masquerade – Rivals
24:56 Final thoughts and review score
TGG REVIEW
7.5 TGG SCORE
0 VISITORS' SCORE (0 votes)
Summary
I do like Vampire: The Masquerade - Rivals but the game really didn't wow me or knock my socks off. The component quality is pretty good although the rulebook could have used another pass by an editor. I dig the rival aspect of the game as well as the events of the city adding a randomness to the proceedings. I'm not a fan of a few things which seem to slow the pace of the game, especially the "influence conflict" which I think brings the game to a screeching halt. Still, I do recommend VtM Rivals and I think big fans of the IP will find it worth a purchase.
REVIEW SCORE
What people say... Leave your rating
Sort by: