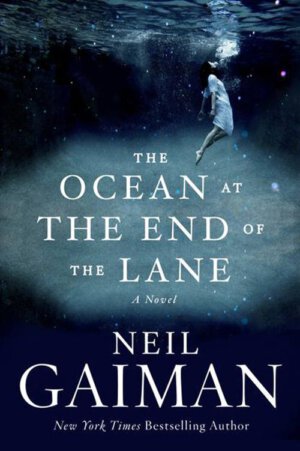 Title: The Ocean at the End of the Lane

Genre: Dark fantasy written by one of the genre’s masters

Ever since Neil Gaiman truly burst onto the scene with his wondrous creation (or I suppose officially we should call it reimagining) of The Sandman, for DC Comics’ Vertigo line, the author has constantly been someone whose newest works are eagerly gobbled up by fans the world over. Whether it’s fantasy with more than a tint of darkness (American Gods, Anansi Boys, and Neverwhere), fairly straight up fantasy (Stardust), or tales designed to spook readers of all ages (Coraline and The Graveyard Book) no current genre writer can quite match Gaiman’s particular style. No one turns a phrase like Gaiman nor paints the same sort of believable “almost realities” where the strange (or in some cases horrific) lay just beyond a wall, through a doorway, or shifting perilously ever closer if only out of the corner of the eye.

Gaiman’s latest novel, The Ocean at the End of the Lane, finds Gaiman in top form and this short – 192 pages to be precise – novel is one you’ll relish devoting a quiet afternoon or evening getting lost within. Our story is one of an unnamed narrator on the cusp of leaving middle age behind returning to his boyhood home. The trip is warranted due to a sorrowful occasion and, although it isn’t spelled out for the reader, we’re led to believe the event in question is the funeral of the narrator’s father.

One of the first things we realize about our main character is the fact we’ll find him to be what’s known in the literary world as unreliable; the character himself informs us as much by saying whole chunks of time have been lost to him and, as we learn much later, although he’s sharing what took place when he was seven years old there are still many other occurrences in his life he doesn’t recall as well. We’re never quite sure if these gaps are due simply to the transition of seeing the world through a child’s eyes to those of a man’s view, as a means to cope with the horrors witnessed, or from an outside force exerting itself in belief some things are best forgotten.

When it comes to books and movies I like to stay as spoiler free as possible so as not to ruin the journey of one’s own discovery. With that in mind I’ll just say the main focus of The Ocean at the End of the Lane is that of our narrator mainly as he perceives life when he was a seven year old boy. The boy is small and afraid and, in many ways, alone. I’m sure he feels like plenty of other kids at that age; unremarkable, insecure, confused by the fathomless actions and motivations of adults, and wary of what may be lurking under the bed. We learn the boy has always felt this way (one of his only solaces is to escape through books) and the reader gets the impression, although the narrator is in his late forties, things may not be much different for our narrator now that he’s an adult.

A suicide takes place on the periphery of the boy’s home life which allows a malign force from elsewhere to enter our reality with dire consequences for our narrator and his parents. Luckily, the boy isn’t as alone as he thought as allies will be found in the nearby Hempstock family and particularly eleven year old Lettie Hempstock, who calls her duck pond at the end of the lane an ocean.

I’ll leave it to the reader to learn how all of this turns out.

The main reason Neil Gaiman can write so effectively for children and adults is due to his ability to zone in on what being a kid is really all about. I’m of the belief as kids we’re actually insane and we only eventually achieve sanity (or a different brand of insanity we as adults pawn off as sanity) through the conditioning of adults and society at large. Yes, I’m strongly in the nurture camp as opposed to nature.

We look back at our own childhoods in which the veil of memory has been fashioned by adult sensibilities. Gaiman strikes a chord because he casts aside that veil and allows us to step back into the shoes of our youth at a time when everyday joys were tempered by the very real terrors of the dark, the neighbor’s dog, being left alone for a moment in a grocery store aisle, stranger danger, and even the mysterious nighttime window or deep lightless closet. To this day I still swear there was something in my closet which led me to close my eyes and count to one hundred before my six year old self would jump out of bed and race to the bathroom. Neil Gaiman knows being a child isn’t all about ice cream and toys and puppies and unconditional love. Gaiman remembers the (at the time at least) very real fears of childhood and, through his exceptional writing, transports us back to those fears as well.

The Ocean at the End of the Lane is not only Neil Gaiman’s shortest book it’s also, for me at least, his strongest. At its base the novel is a story about stories. A modern day fairy tale with modern sensibilities. We have the intimacy of a seven year old’s eye to the proceedings voiced through the distance of an adult’s state of mind and vocabulary. That alone in itself is a neat trick for an author to pull off. Gaiman also further grounds the novel in reality by sprinkling in events from his own life (the author has said so himself) which, oddly enough, really make the moments of magic and horror that much more believable and powerful.

Where some readers may find disappointment is in the fact everything isn’t spelled out in neon lights and you have to come up with your own answers to some of the whys or what happens nows; Gaiman isn’t willing to take you by the hand, or hold up a big sign indicating a payoff, or even emphatically state if there’s a complete and utter resolution to all which takes place. Personally I appreciate a story which leaves one to interpret the tale as one sees fit or asks you to draw your own conclusions but I know that isn’t everyone’s bag of tricks.

The Ocean at the End of the Lane is a wonderful tale and surely deserving of the few hours you’ll spend with it in your favorite reading nook. You’ll find the novel to be tightly written, with Gaiman’s usual deft hand at prose, and mighty difficult to put down. Although the book is touted for adults there really isn’t anything within, with the exception of a pretty nongraphic sex scene presented from a child’s viewpoint, to make it unsuitable for readers in their early teens. In fact I’d recommend the novel over nearly any of the YA dreck which is currently clogging bookshelves.

Fans of Neil Gaiman should be delighted by his latest novel and for those of you who haven’t read any of his previous work, The Ocean at the End of the Lane is a perfect place to start.

Fans of Neil Gaiman should be delighted by his latest novel and for those of you who haven’t read any of his previous work, The Ocean at the End of the Lane is a perfect place to start.

User Rating: Be the first one !
Tags
Neil Gaiman The Ocean at the End of the Lane William Morrow

Pathfinder: Devil at the Dreaming Palace | Review and Page-Through

It’s Not All Wet: They Came from Beneath the Sea! Reviewed