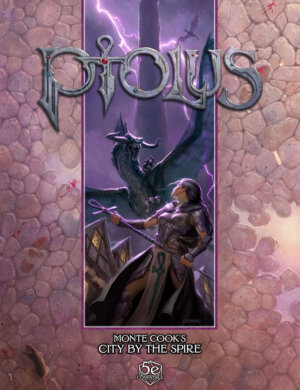 The high fantasy roleplaying game setting Ptolus, from Monte Cook Games, is the subject of a money saving Bundle of Holding. You can get aboard for both the 5E and Cypher System editions for $17.95. You can score these savings through June 6th and ten percent of your payment (after gateway fees) will be donated to this offer’s pandemic-related charity, Direct Relief.

Delver! This new Ptolus Cypher Bundle presents the 2021 versions of Monte Cook’s famous City by the Spire, Ptolus. In the shadow of an impossibly tall stone column, the sprawling city of Ptolus sits atop ancient dungeons that draw adventurers (“delvers”) from across the land. Humans, dwarves, elves, and halflings rub shoulders with leonine littorians, winged cherubim, and even centaurs and lizardfolk. Magic is everywhere; intrigue and treachery abound; someone always needs to hire adventurers to face bizarre chaositech abominations, the fearsome wintersouled, or dangerous soul magic. Delve the endless dungeons and, when you’re ready, ascend the Spire to confront an ancient and restless evil.

Originally published to critical acclaim in 2006 for D&D 3.x (we presented that one in September 2014 and again in May 2016), Ptolus thrives again in new versions for Fifth Edition and the Cypher System, funded in a spectacular February 2020 Kickstarter campaign. As before, the Ptolus core campaign setting book is lavishly produced, with abundant maps and illustrations, multiple indices, heavy cross-referencing, hyperlinking and bookmarking, and quick-access summaries. With this single book, and the play aids in this bargain-priced offer, you can take starting player characters all the way to epic play — twice over.

For just US$17.95 you get all five titles in our Ptolus Collection (retail value $75) as DRM-free ebooks, including the complete, full-color 676-page Ptolus corebook (in versions for both Cypher and 5E, plus more than 300 pages of bonus content), along with the two Ptolus Character Portfolios, the GM Screen, and the NPC Deck.

Score Big Savings with the Aces & Eights Bundle of Holding