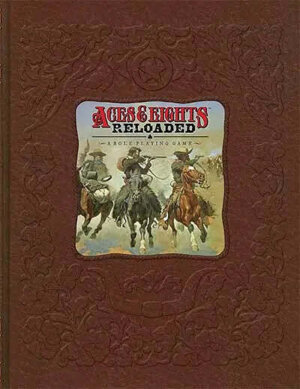 Bundle of Holding is currently offering a money saving deal on the Old West roleplaying game Aces & Eights from Kenzer & Company. This revised deal also includes the updated Reloaded core rule book. You can get aboard for $14.95 or go all in at the current threshold price of $25.89. These savings run through June 29th and ten percent of your payment (after gateway fees) will be donated to the pandemic-related charity, Direct Relief.

Our original September 2015 offer featured the 2010 Shattered Frontier edition of the Aces & Eights core rulebook. In April 2017 Kenzer Kickstarted an Aces & Eights Reloaded second edition. This revival presents the new Reloaded edition along with the compatible first-edition Shattered Frontier support line. (If you purchased this offer in its 2015 run, you receive the new Reloaded rulebook automatically on your Wizard’s Cabinet download page.)

This revived 2015 offer once again delivers an Express coach full of everything you need to run your own campaign of Wild West adventure with rules as open and extensive as the land itself. For just US$14.95 you get all three titles in this revived offer’s Player Collection (retail value $40) as DRM-free ebooks, including the lavish 393-page Reloaded core rulebook, the Shootist’s Guide with extra Target Silhouettes, and the introductory solo adventure Bad Day at Buena Roca.

And if you pay more than the threshold price of $25.89, you’ll level up and also get this revival’s entire Gamemaster Collection with seven more titles worth an additional $100, including the Judas Crossing location sourcebook, two big Rustlers & Townsfolk books of nonplayer characters, and four complete adventures. One of them, Harshaw Creek, is also new in this revival — and again, previous customers get the new addition automatically.

Score Big Savings with the Legacy: Life Among the Ruins Bundle of Holding