IDW Publishing has an interesting new Darby Pop series arriving next February, City: The Mind in the Machine, which is sure to be a hit with fans of the cyberpunk genre. The series is created by acclaimed writer Eric Garcia with art provided by Javier Fernandez.

From the minds of writer Eric Garcia (Matchstick Men) and artist Javier Fernandez, Darby Pop Publishing’s City: The Mind in the Machine will make its debut this February!

“Practically every day in the news there’s a story about a new interface between man and machine. We’ve gone from punch-cards to keyboards to touchscreens in a matter of decades, and direct brain-system connections are already being explored,” said writer Eric Garcia. “Between that and the ubiquity of wireless networking, we’re living in uncharted territory — which is why I’ve been so excited to tell the story of CITY: MIND IN THE MACHINE. It’s been a thrill working with Javier and Darby Pop to explore these concepts and bring this world to life.”

Surveillance is everywhere, like it or not, and Ben Fischer has helped to build the world’s most powerful surveillance system, Golden Shield.  By utilizing every camera, cell phone and computer in San Francisco, Golden Shield was designed to help battle the city’s crime.  But what Ben Fischer quickly finds out is that something that powerful never comes without a price and that his creation cannot properly function without a human brain to operate it.

This action-packed series takes a look at what it means to meld man and machine as well as explores the roles security and technology play in modern society. 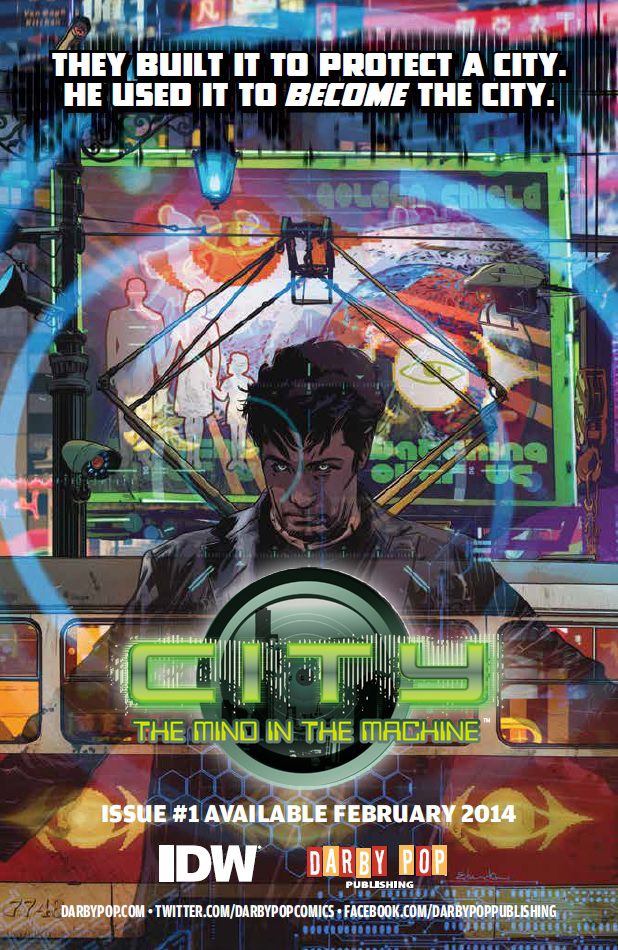