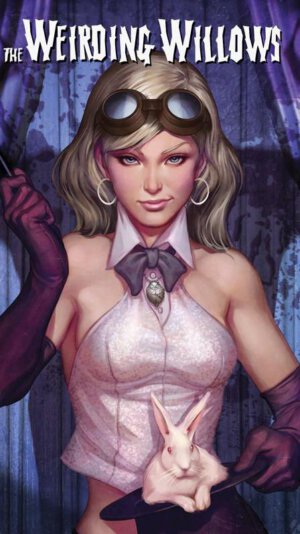 For the first time ever Titan Comics is collecting The Weirding Willows, which originally appeared in the A1 anthology series, in one collection. It’s a wild mash up of literary characters in a tale guaranteed to entertain. Created by Dave Elliott, Barnaby Bagenda and Sami Basri, The Weirding Willows will be available July 1st.

Keep in mind the image to the right is from A1, since I haven’t seen the graphic novel cover as yet.

When she was nine, Alice discovered a portal to another world… a world called Wonderland! But Wonderland isn’t the only world connected to the Wild Woods, a dimensional nexus that Alice spent her childhood exploring. It’s a strange, magical place where Earth, Wonderland, OZ, Neverland, Mars, Pellucidar and Elysium collide – and where anything can happen!

From talking rabbits to winged monkeys, from Frankenstein’s Monster to a rampaging purple T-rex, from a kidnapped Mowgli to a werewolf with a deadly secret – there’s never a quiet day! Now a young woman, Alice and her amazing friends are all that stand between the gateways in the Weir – and those who would exploit them.

The Weirding Willows is the ultimate literature pop culture mash-up featuring classic characters such as Alice from Alice in Wonderland by Lewis Caroll, Damon Frankenstein from Mary Shelley’s Frankenstein, Mole, Ratty, Mr Toad and Mr Badger from The Wind in the Willows by Kenneth Grahame, The Wicked Witch of the West from The Wonderful Wizard of Oz by L. Frank Baum, Dr. Henry Jekyll from Strange Case of Dr Jekyll and Mr Hyde by Robert Louis Stevenson, and many more!