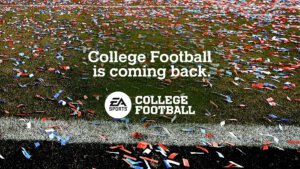 I know I’m not the only one that shares this thought, time and time again I’ve heard fans of college football odds and action speak their minds about this topic, so here it is. It’s about time EA Sports finally brought back one of the absolute best sports gaming franchises back from the dead with the relaunch of their college football video game. Yes, we have Madden and it’s great, we love it, but there was something about that old NCAA Football video game that just made it so good.

Once the announcement was made by EA Sports that they were finally bringing back their cult classic college football centered video game, now called “EA Sports College Football” fans from all ages, meaning those who remember the game prior to its cancellation in 2014 and newer fans all got the ball and excitement rolling and for very good reasons. With all this said and while we wait until July 2023 for the release of this game, let’s talk about three things all fans of this game wish to have from “EA Sports College Football”.

Imagine for example being able to play with LSU’s 2019 squad, you know, the Joe Burrow led Tigers team that could very well be deemed as the absolute best college football team to ever play. Or maybe you’re not so much an LSU fan, how about playing with Trevor Lawrence’s 2018 championship team. If that still doesn’t convince you, then imagine playing with the 2017 Louisville Cardinals team. You remember who was their QB? Yes, Lamar Jackson, who’s playing skills are the closest thing to a cheat code and video game highlight reel in real life. Please EA Sports, we’ve waited long enough, make it happen.

College Athletes Deserve To Make Money Off This Game

While beforehand the idea of college athletes being able to make money off their name and image, be it through sponsorship deals, endorsements or other manners was frowned upon and unfairly deemed as illegal, times of change are finally upon us. Different states in the US have finally made the right choice and decision to allow college athletes to be able to collect revenue from the use of their name, image and likeness. While before, the denial factor for college athletes to be able to receive payments for the use of their NIL was one of the main reasons that EA Sports ultimately ended up cancelling the beloved football gaming franchise, EA is in the right position to do everything right by the players this time.

It’s no secret that as soon as this game hits the market it’s going to be a smashing hit. It was before it was unfairly cancelled and it will most probably have the same effect again so it’s on EA’s back to make sure that everything is done in the best way possible this time. Both schools and athletes will end up benefiting greatly from being able to be part of the upcoming game, especially given the fact that sales will probably be very high, so why not just give the people what they want, both fans, athletes and the schools. Allowing fans to experience a more realistic experience will only add up to the likeability factor of the game and it will help put it over with everyone around, making it a win-win for everyone.

The Transfer Portal Needs To Be In The Game

Just like in real life nowadays players are able to transfer from one school to the other to be able to have more playing time and put themselves out there for pro scouts to watch them and gain notoriety, the upcoming EA College Football game has to allow fans to have the option of having the transfer portal too. The portal not only offers teams and players chances to get better but it also adds to the dramatic side of the game.

Imagine having a top tier QB and then all of a sudden he decides to bounce, wanting to look for better opportunities at another school. That should be enough reason for gamers to want to play with more passion and intensity in order to play their former QB and take him down. This will mean that in order for everyone to be happy and not have players leave, all gamers will also have to make sure to not only play the game well but manage it like a true pro.