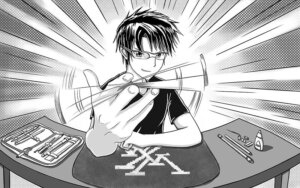 You might not know, but Japan is known for many unique and odd things, one of which is manga. Meaning ‘whimsical pictures’, manga is a term, referring to both comics and cartoons. Interestingly, manga is popular not only in the the country of the rising sun, but all over the world as well. Moreover, the manga industry generates over $3 billion in revenues each year.

There are manga comics about everything – from adventure to sci-fi, from comedy to thriller. Of course, there are also sports manga and, oddly enough, gambling manga. In the lines below, we will discuss 7 of the best gambling-related manga for you to read and play at casinoreports.ca/online-casinos.

Tobaku Mokushiroku Kaiji, literally meaning Gambling Apocalypse Kaiji and also known as Ultimate Survivor Kaiji, is one of the best gambling-related manga. Written by Nobuyuki Fukumoto, Kaiji was created in 1996.

The manga is centered around Kaiji Itō, a poor man who never stops trying to escape from debts. Kaiji wagers with his neighbours, but lady luck is never on his side. When he has a near-death experience, however, he realises that he possesses unique gambling potential which helps him escape many unpleasant situations.

Kakegurui, full title Kakegurui – Compulsive Gambler is a Japanese manga written by Homura Kawamoto. The manga presents Hyakkaou Private Academy, a private school educating children of elite Japanese families. Contrary to expectations, the children of the Academy do not become leaders, but indulge in a dangerous game.

The Academy has a unique gambling system which allows pupils to place bets against one another, putting their fortunes at stake. Those who do not make a contribution due to debts become “house pets”. Additionally, those who can not pay their debts before graduating receive Life Schedules which control their entire lives. However, everything changes when Yumeko Jabami enrolls the school.

Another outstandingly popular gambling manga is Gamble Fish, written by Aoyama Hiromi and illustrated by Yamane Kazutoshi. The story follows Tomu Shirasagi, the 14-year-old son of the notorious trickster Yumeichirou Shirasagi. Tomu enrolls a renown school for rich and famous children called Shishidou Academy. There he realises he is no ordinary boy.

In an encounter with the grand daughter of the dean of Shishidou Academy, Tomu realises that he is an expert con artist.

The full title of this unique Japanese manga is Akagi: Yami ni Oritatta Tensai, meaning Akagi: The Genius Who Descended into Darkness. Published in 1991 and written by Nobuyuki Fukumoto, Akagi follows the story of Shinegu Akagi, who beats two Yakuza members in mahjong.

Shortly after, he disappears. All of a sudden, he decides to return and challenge Iwo Washizu, the king of the Japanese underworld.

Serialised in 2005 and written by Shinobu Kaitani, The Liar Game is one of the most popular gambling-related manga comics ever written. It became so popular that it was translated into Chinese and Dutch.

The story follows Nao Kanzaki, a shockingly honest student, who receives a package with $1 million. The package contains a note which says that Kanzaki has been invited to the Liar Game Tournament.

Unlike casino game tournaments most of us play, the Liar Game Tournament boasts a completely new set of rules. Players have to lie and cheat and whoever loses has to pay a sum corresponding to their losses. Kanzaki makes a deal with con artist Shinichi Akiyama, who helps her advance in the game as well as free their opponents from debt in order to destroy the organisation of the Liar Game Tournament.

Written by Amajishi Etsuya, Mukōbuchi: The Tale of High-Stakes Underground Mahjong is a manga set in the 1980s. The price of estates skyrocketed and the value of money followed suit. Consequently, Japan ended up in one of the biggest bubble economies ever.

Mahjong saw an age where high stakes games were higher staking than ever before. In this age, Kai lives as a Mukōbuchi – a lone-wolf gambler.

Ōsama GameNobuaku Kazanawa is the author of Ōsama Game (The King’s Game). This is a captivating cell phone novel centered around text messages.

Kanazawa Nobuaki receives an odd chain text message, and soon realises that he is not the only one. In fact, his classmates have received the same creepy message, which informs them that they are now part of the King’s Game. The game’s rules are simple – participants have to perform pranks on each other within 24 hours. Soon, however, those pranks become dangerous and disgusting. When one of the students fails to perform a task, Nobuaku realises that failure to achieve the game’s requirements results in death.

When you lose money in gambling, there is always a chance to restore your losses. But when you stake your life, things become completely different. And that makes the King’s game the ultimate gambling game.

A Lucky Seven Facts About Video Poker You Didn’t Know