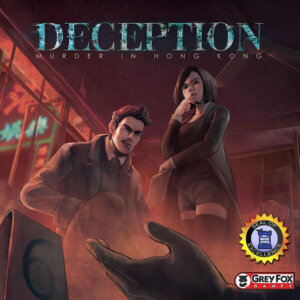 One of the most beloved mystery and social deduction games of the last decade is on sale on the website of its publisher, Grey Fox Games. The classic Deception: Murder in Hong Kong was first published in 2014 and is a winner of multiple awards (2019 Juego del Año Recommended, 2017 Lys Grand Public Finalist, Dice Tower Seal of Excellence). Among its mysteries is why Hong Kong is in the title at all. The exotic charm of the Asian megalopolis must have something to do with it. If you feel attracted to it, you can also try the best online casinos in Hong Kong, which can provide passionate gamers with all the thrill they need.

One more investigation you may want to spend time on is why the game has been circulating under another name, CS-Files, and distributed by Jolly Thinkers. These guys are actually based in Hong Kong (while Grey Wolf Games is based in Fenton, Missouri), where they are publishers of board games and own two stores, one of them with a nice large cafe. Both versions quote Tobey Ho as the designer of the game. Another interesting trivia is that Deception: Murder in Hong Kong was the object of a Kickstarter campaign in 2015. As many as 1,796 backers contributed $65,777 during the campaign and received the game before it was released in retail stores. Board Game Geek awarded it a score of 7.5/10. Buyers on Amazon give it a 4.8-star rating and more than 1,000 reviews.

The game is simple and quick-paced, primarily based on the social interaction between the players. Those who tried it suggest an ideal dimension of 6 to 8 players. Officially, the 250 cards are enough to support 12 of them, but those who attempted complained that the cards’ small size requires a lot of walking around the table and destroys the fun. In December 2017, the Undercover Allies expansion was released, adding three new roles to the game (Lab technician, Clever Accomplice, and an Inside man). The total of supported players is thus raised to 14, with the addition of more clue cards and tokens to the game.

Why is six players the minimal dimension for a good game? The roles, randomly assigned by a specific deck of secret identity cards, are as follows: apart from one Forensic Scientist, all the players are officially Investigators and receive a badge-card to attest it. But one of them is also, secretly, the Murder. The players learn their role from their role card, but only the Forensic Scientist makes it public and then acts as the game master. Two more “undercover” roles are the Accomplice and the Witness.

The game begins with everybody closing their eyes, apart from the Forensic Scientist who commands the Murderer and Accomplice to open theirs. They do so in silence, so the Forensic will be the only one who knows their identities. The Murderer has to choose two cards from the series “Key Evidence” (red deck) and “Means of Murder” (blue deck). Each player receives four of each, but once they start playing, only the Forensic will know the two chosen by the Murderer. He will not be allowed to speak, only to give clues with the cards from a different deck.

At this point, the game can start with this distribution of roles:

Now you see the point: with 1 + 3 special roles, you need at least two investigators for a sufficiently diversified group of players. In theory, the more Investigators you can gather (up to 8), the better. In practice, since the clues are very vague, the whole thing could become cumbersome and boring if you have too large a number of people taking part in discussion with their individual hypotheses.

The Forensic Scientist leads the Investigators to discover the Murderer using only special clue cards or “scene tiles.” The rest is left to the social interaction between the players. Each Investigator has only one chance to make an accusation (a guess on the Murderer’s identity). If he succeeds, the whole team wins, otherwise one scene tile is substituted, and the second round, the final one, begins. Important: the Murderer still wins the game if no one correctly identifies both the “Key Evidence” and the “Means of Murder.” The other chance of the Murder to get away and win the game is to identify (“kill”) the Witness.

You can check out other coverage of Grey Fox Games right here.

The Best Manga and Comics for Teens

Online Sports Betting Allows You to Gamble from Home