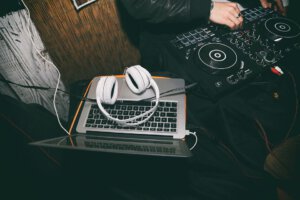 Without music, video games would not have us perched on the edge of our gamer seats with sweaty palms. It is the music that heightens out emotions, creates suspense and tension – and pairs with the action unfolding to complement the game.

From Daft Punk in DJ Hero to famous bands’ music featuring on slot machines at popular casinos like Royal Vegas, the extent of music’s influence on all types of game is plain to see. Many EDM artists have specifically ventured into the world of gaming and left their mark on popular titles. Here are some of them…

In 2009, Skrillex made a video game of his own with lots of famous tracks. The game, Skrillex Quest, was something like Legends of Zelda with a magical world where battles would commence, but it was struck down after a malfunction caused the game to not work properly. Today, the game is not played anymore, and you probably missed out.

Steve Aoki is well-known for tossing cakes into his crowd, but now he is tossing them at flying monsters in a game dedicated to him. Back in the day, you may have played helicopter where you had to navigate a little helicopter along a route without going too high or low – and crashing into the walls. The game is a similar design to that boyhood game but instead you navigate Steve Aoki and use cakes to keep monsters at bay.

The game is found on an app that is still available in both the iOS and Android stores.

We are surprised this hasn’t caught on. Rustie had an innovative idea to make listening to a full album more entertaining. A game was created where players would access the next song in the album by reaching a checkpoint. The game was made to be played on a browser but doesn’t seem to be active anymore.

The beat guru has also created his own game that can be played on his website – but we warn you it is addictive as anything. It is a tap-tap game where you must miss obstacles coming your way (a bit like that helicopter game we referred to earlier and the likes of Flappy Bird). Collect points on the journey and enjoy some killer beats from the man himself.

It is not just EDM artists getting involved with gaming either. The likes of Paul McCartney, Michael Jackson, Guns N’ Roses and David Bowie have all been involved in writing music for video games or slots.

Music will continue to be a part of all art forms from gaming to TV and movies because it is a driver in creating emotion and heightening our senses.