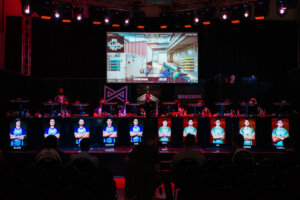 Esports and gaming in South Africa

Esports became such a huge topic over the years that it got covered by one of the leading media in the country, CNB Africa. What’s up with Esports in South Africa, and what are the games South Africans play? Follow this article to find out.

The rise of gaming for competition

Plenty of people play video games. Numbers as high as 41% of adults are reported in the US. There are no reliable studies that examine how many South African adults do the same, but the odds are the numbers are similar.

Few South African adults have ever played a video game for competition, though. If you’re not into CS: GO, Dota 2, Hearthstone, or Overwatch, you may not even know how big this scene is.

The thing is regular video games have grown way beyond solo entertainment over the years. The games that are more capable of giving you an experience of confrontation were picked up by the community and made into a sport.

Come to think about it, there’s nothing weird about this. People always love to face others in a match, like football. But few can show perfect performance. When a particular game is loved by millions, they are willing to see others play it.

This is exactly what happened to video games. Enthusiasts of some games have formed teams to compete against each other. While it started as pure fun, cybersports have now grown into an R15 billion industry.

South African teams started popping up in the late 2000s and now wreak havoc in the world of competitive gaming. Top players who specialize in FIFA and CS: GO have earned over R2.5 in 2018.

Now, South African teams don’t even have to go abroad to compete, as there are local tournaments like ACGL.

There are other ways people are engaging with modern cybersports – read more in our fresh review. Many simply watch other people play the game on YouTube. Why are they doing this?

First, there’s the same drive to see someone excel at a game, the same that forces millions to watch a football match. Some people want to feel the pleasure of seeing a move executed just perfectly, something they cannot achieve themselves.

However, you don’t need to be any good at the game to make for a YouTuber. PewDiePie is looked upon by many people because of his content, but not by content creators.

They understand the power of his videos. He started his career as a video game YouTuber, but it’s the commentary, not the skill that brought him fame.

This is why many young South Africans watch his and many other videos like this. Playing the game is not as important as the funny commentary the entertainer provides.

CBN Africa has interviewed a South African YouTuber who does just that. With big international stars like PewDiePie, few people watch locals, however. As the list of South African Twitch streamers shows, the top numbers of subscribers are not over 50,000.

Over 41% of adults play video games in the US. The same percent may be true of South Africans. There’s a difference in games, however.

The majority of locals don’t know what Overwatch is and have no intention of learning it. Naturally, the number of people who play video games and watch Twitch and YouTube streamers play them is lower than in the US.

What South Africans love is gambling. Video slots, roulette, poker, and the like are more popular in the country than video games. They’re not going out of style either. But now that esports discover a new competitive side of gaming, South Africans may begin to switch.