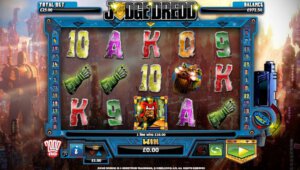 Comic books continue to be hugely popular and the characters within them are proving popular in other media forms. There have been the massive box office hits featuring The Avengers, X-Men, Superman and Spider-Man but there are also plenty of online games.

Slot games have changed in the past couple of decades with many now based on comic books. There is such a wealth of characters that can be used, and the production of online games based on them have been big hits.

When it comes to slot games, NetEnt games have always been keen to produce games based on comic books. Before the not too well received movie, the Justice League of America (JLA) had been a top selling DC comic for decades. NetEnt produced their version of the comic book and featured the Green Lantern and Martian Manhunter.

Green Lantern hasn’t been a hit in the cinemas but NetEnt also produced their own slot version of the character and it has proved to entertain fans more than that dreadful movie.

Not all comic books are published by DC or Marvel. Judge Dredd has been a popular comic character in the UK for many years, notably in 2000AD. NetEnt also created a slot game about this futuristic cop taking its players to Mega City.

Top superheroes such as Superman, Batman and Spider-Man are continually having slot games dedicated to them. Recent years have seen the box office revenue taken by comic superhero movies go through the roof. It’s logical therefore that the knock-on effect is for online games to be released.

Batman has been a popular superhero since the 1930s. From the original comic books, the character has been featured in the camp 1960s TV series to the blockbuster movies released over the past few decades.

There have been many different interpretations of the character and those are reflected in the online games produced. The 1960s TV series has been featured in popular games such as ‘Batman & The Joker’s Jewels.’ ‘Batman & Catwoman Cash’ and ‘Batman & The Batgirl Bonanza’ all featured graphics from the popular series. They also included progressive jackpots, that’s something that has also been featured in many slots based on characters from Marvel comics.

‘The Dark Knight Rises’ is a much darker adaptation of the character. The Joker is featured here, but he’s a lot more insane than the Cesar Romero interpretation from the 1960s.

When it comes to Marvel, Iron Man has been one of their most successful characters. The three Iron Man movies were all massive hits and then there were the Avengers films that dominated the box office. Creating online games featuring the character just had to happen. The movies became slot games and were big hits.

Comic superheroes show no sign of fading in popularity. With more movies on the way, the production of online games featuring them will continue. The most recent games have excellent graphics, so look out for the next set of releases.