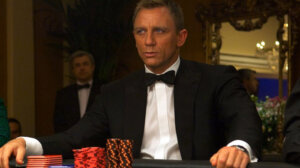 The very first James Bond book – Ian Fleming’s 1953 Casino Royale – opens with the illustrious spy in a casino at 3am. The 1962 debut film’s introduction to the superspy, Dr No, also features a casino – and the first uttering of his iconic introduction. Given the prevalence of game playing in the series – the spy plays games with the villains, with his female companions, and even with state secrets in order to complete the mission – this is no happy accident.

Since the days of Bond, the way games are played has changed. More and more people are opting to play online rather than in person, and the casino culture Bond indulged in isn’t the norm for a lot of players. In fact, it could even be said that Bond influenced some of the online casino games available, with a lot of the suave, sleekness of Bond’s casinos translating to the online poker available. For example, 888poker features the games Bond plays – from standard poker to blackjack – and features Bond-esque characters as the dealers and involved in the game. By enveloping the games in the Bond trimmings, the suaveness of the agent can be translated into the online casino experience. But, just what was it about Bond in the casino that was so popular? Here’s a rundown of the top five casino scenes in the James Bond movies.

James Bond is a very skilled card player. The villains he is pitted against are also often very good card players. The James Bond films code the game of gambling as a battle of wits and masculinity. So, when James Bond comes to challenge the villain, he often does so in their first meeting over a card game. The first instance of this was in Sean Connery’s fourth film Thunderball (the previous film, Goldfinger, featured a round of golf). James Bond, investigating the death of a naval commander and theft of plane missiles at the hands of SPECTRE, used the card game to let SPECTRE Number 4 Emilio Largo know that he was on to him. The tension amped up as the cards were tossed and showed us that James Bond was one smooth operator.

First impressions are everything – and that couldn’t be truer for James Bond. The inaugural film, Dr No, featured a game of baccarat against a dazzling woman allowing Bond to quip, strike a cigarette, and coolly introduce himself as “Bond, James Bond”. Sean Connery’s introduction would set up the character for the audience for the next 50 years. The impact would arguably not have been the same had James Bond been trying to roll a double six for a game of Monopoly, or had unsuccessfully fingered the killer in Clue.

Timothy Dalton’s sophomore outing as the superspy in 1989 featured one of the biggest variations to the film’s formula. Angry at the death and mauling of his best friends, Bond goes rogue, believing he can succeed in his personal vendetta better than the British government can. Acting as a disenfranchised ex-agent, Bond acquaints himself with villain Franz Sanchez at Sanchez’s casino in the fictional Isthmus City. By dropping such a large wager in the casino, Bond is able to introduce himself to Sanchez, and begin his mission of infiltrating the organisation and exacting revenge.

Diamonds Are Forever is one of the zanier of the Bond films. Featuring Connery’s return after a one-film absence, the film was partially set in the home of card games, Las Vegas. The film featured many scenes at a casino – including a deleted one with Sammy Davis Jr – and even brought in arcade elements in order to show how the villains were able to smuggle conflict diamonds to their highest bidders. Bond meets the perfectly named Plenty O’Toole while he lets her shoot craps for him, as he lets Blofeld’s henchman Bert Saxby clock his spending.

There can be no list of the best card games played by James Bond without the mention of Casino Royale – which is, in fact, one long card game. Bond attempts to bankrupt Le Chiffre, financier of the organisation Quantum, and later SPECTRE, who has invested a lot of their money in winning the poker tournament at Casino Royale in Montenegro. Bond is a skilled poker player – no doubt from years of practice. The game in the film is broken up by poisonings, fighting, murder, and intrigue, and no prizes for guessing who the winner of the tournament turns out to be.

James Bond quite often uses playing cards to get further in his missions, with his potential female companions, or even just to utter memorable lines. Bond 25 has kept itself out of the press for a while, and with a likely Daniel Craig comeback, there is also the chance that Bond will find himself in a casino in some way in the next film.

SPECTRE: The Board Game to Arrive Next Spring from Modiphius Entertainment