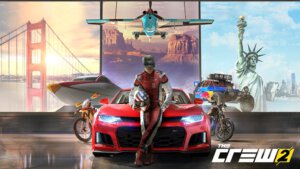 The newest update for The Crew 2 is online! Ubisoft had launched Summer in Hollywood on July 8th, for its popular online-only open-world racing game. Platforms include PlayStation 4, Xbox One, PC and Stadia. The free update is available to all The Crew 2 players. There are 24 additional cars available and 48 new vanity items. Among the new models, you can find the Koenigsegg One:1 (2014), the Porsche 911 Carrera 4S (2020), the Volkswagen Beetle (1967), and the Chevrolet Camaro ZL1 Rift (2017).

When you want a pause between races, visit Hollywood and grab a bonus code to challenge your luck. Then go back to Motornation and pick your favorite vehicle. Every week, The Crew 2 will offer a live summit event on different themes. The series kicked off with Roll Out. The current Live Summit is The Beach
(July 15-21).

What’s up for the grab?

The Summit Bundle for the week contains all the vehicles that players need to complete the events:

The latest edition of the Elite Bundle includes:


The Crew 2 is an exceptionally feature-rich game. The vehicles available to players include cars, motorcycles, monster trucks, airplanes and more. The extensive map of the game renders complete North America. A player can enjoy the thrill of riding down Los Angeles in a supercar, to name but one of the possible user’s experiences.

The collection of cars is very varied, from Hyper Cars, hot-rods and Buggies, to Drift Cars, F1 cars and beyond. A recent update has brought the total to 114 cars, but the number is continuously rising as developers add new vehicles.

Cars in the game can be purchased for money or credits at any of the four main racing headquarters located the in-game map:

Each headquarter has its unique choice of vehicles, so you will need to visit them individually to find the car that suits you best.

Why You Should Play Online Video Games Using PCs