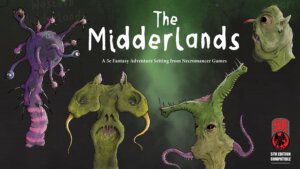 MonkeyBlood Design & Publishing and Necromancer Games are teaming to bring the popular off-the-wall OSR fantasy setting The Midderlands to 5th edition Dungeons & Dragons. The setting is a re-imagining of England as a strange, Gloomium infected land. The project is over 75% funded and you can reserve a copy of the book in PDF for a $20.00 pledge or score the hardcover and map for a $40.00 pledge through April 2 with an expected delivery of this October.

The Midderlands is an award-winning, weird world-setting for fifth edition (D&D). It’s late middle ages/Tudor England seen through a looking glass, filled with strange creatures, insidious threats, and the color green. It’s edgy, it’s twisted, and the first thing you should expect is the last thing you’d expect. Looking for a 5e setting completely different from anything you’ve seen before? You’ve found it – now let’s see if you can survive it…

Words from the Author

The Midderlands exists because of a series of fortunate thoughts.

It was mid-late 2016 and often I would go around to my partner’s house on the evenings and whilst she sat on the sofa watching the television, I doodled the heads of strange creatures in side profile.

I had no plan for these doodles, but I had a sketchbook and I wanted to fill quite a lot of it. As I doodled, I imagined that these creatures might live in the surrounding lands where I lived. That gave them much more life. I then thought I could create a book of creatures with a little about where they live and what they do.

Then I figured that rather than living in the land where I do now, why not an alternate version of where I live. It would be a bit weirder, darker, gloomier. I wanted something that made the land the way it did. That’s when Gloomium became a thing.

The locations would be inspired by the real world, but twisted and green-tinged, so I needed a map. I made an alternative version and that’s when I decided this was a game setting.

The creation of the initial setting book for old school games – the 5E version of which is being crowdfunded here – spawned another book which covered the rest of the United Kingdom, and then a further book which focused on the setting’s version of London, Great Lunden.

I have been amazed with its success and wanted to bring a version of the original to the 5E audience, so they too could enjoy wandering its twisted locales and encounter its unusual creatures. I just wasn’t sure how to achieve it.

Luckily, the kindly amphibians at Necromancer Games came to the rescue and we are now in a great position to bring a new version of the setting to you. My hands will be heavily involved in new and updated artwork and maps and a new layout.

This is going to be exciting and you won’t want to miss out.

Jeff’s note: I’ll mention there isn’t a video for the Kickstarter project but if you’re interested in my thoughts on the Swords & Wizardry edition of The Midderlands, check out my review below.