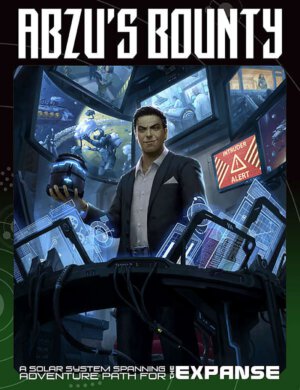 Price: $18.95 in PDF at DriveThruRPG; the physical book is on the horizon

Abzu’s Bounty, a campaign for Green Ronin’s superlative The Expanse RPG, soars over the high bar already set by past releases to deliver a thrilling series of adventures that plunge players into the middle of a dangerous game.

In order to provide a full overview, this review is not spoiler-free. Similarly, if the books on which the game is based or the SyFy/amazon Studios adaptation are anywhere on your ‘to get around to’ list, elements of both will be spoiled by the campaign — and, by extension, this review.

At the heart of Abzu’s Bounty is the protomolecule, an extraterrestrial infection first discovered on one of the moons of Jupiter. Though not a lifeform itself, the protomolecule radically alters those infected, repurposing their 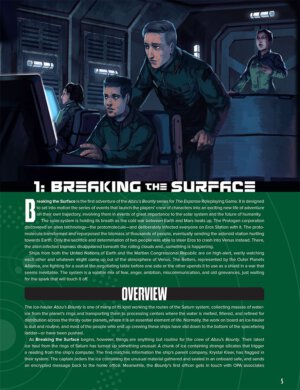 biomass after death. Though it’s not strictly necessary, GMs interested in a more detailed understanding would do well to avail themselves of Leviathan Wakes or the first two seasons of the show.

In the opening act, a sample is accidentally recovered from the rings of Saturn by the crew of the Abzu’s Bounty, an ice harvester under the Krystal Kleer corporation. Pirates descend, seizing the sample, the players, and any surviving crew before obliterating the Bounty. From there, it’s off on search of pirate radio, to Mars on the trail of a murder mystery, the discovery of a startling conspiracy, an elegant ball, and a luxury liner. The variety of situations and skills required to successfully navigate them means players of all stripes can find an opportunity to shine and help to keep the twists and turns of the narrative feeling fresh and unexpected.

That is, if things play out as expected.

Abzu’s Bounty is written to be flexible. It’s written in a way that it can be played straight out of the box, yes, but the team at Green Ronin also makes it clear that the story as provided is simply a framework. Depending on the composition of the party, the choices they make, or the circumstances of the gaming table, the tale of Abzu’s Bounty may take a very different form. The text offers no shortage of suggestions as to how modifications could take place, but it also grants DMs explicit permission to do what works.

It’s a risky move, but it’s one that pays off. The book, as with the core material, is so rich in its worldbuilding and does so much in providing establishing background for NPCs that an off-track adventure is an opportunity to be explored, rather than a problem to be solved. It’s a nice balance of structure and freedom, making this a campaign that is friendly enough for a new GM, but rich enough for a veteran to experiment and flavor as necessary.

While the main campaign composes six adventures, each is designed with a long interlude in between. This gives the opportunity for side quests, be they other Expanse adventures, such as the eerie Salvage Op, or 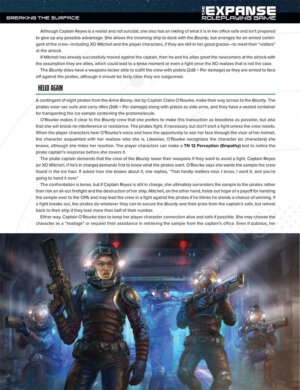 original creations sprung fresh from the minds of the players and GM.

Communication among all parties is perhaps more important here than it is in other Expanse adventures, however, a fact that should be noted upfront. Character creation, if playing the campaign straight, has a number of suggestions for party composition, as well as the need for at least one strong bond been a player character and a specific NPC. As with out titles in the line, while the ability to fight is nothing to sneeze at, expectations for “murder hobo” behavior should be discussed at the outset, as it stands to seriously disrupt the flow of any narrative set in this world.

As typical for books in the series, the layout is thoughtfully handled and visually appealing. Important stats and information are in easy-to-see, hard-to-miss callout boxes and the text is formatted so as to be friendly for print or screen reading. The art is abundant and lovely to look at, helping to round out the sense of the world and its inhabitants.

From the outset, The Expanse established itself as one of the most versatile sci fi tabletop gaming experiences currently on the market, supported by a team with a clear vision and an obvious love for the source material. Abzu’s Bounty adds to an already excellent line of products, and offers untold potential for new adventures, either as written or as the seed of a completely different experience. If you or the people who gather around your table have even a passing interest, Abzu’s Bounty is a worthy addition.

TGG REVIEW
9.5 TGG SCORE
6.5 VISITORS' SCORE (1 vote)
Summary
Abzu's Bounty draws heavily from The Expanse's source material to deliver a thrilling narrative for players of a variety of interests, skill sets, and play styles. Strong writing, versatile storytelling, and ample room for improvisation deliver a winning experience for GMs, providing a strong foundation for whatever direction the campaign may take. If you're already a fan of Green Ronin's work, you won't want to miss this --- and, if you've got friends who need an introduction, this could be the place to start.
REVIEW SCORE
What people say... Leave your rating
Sort by: