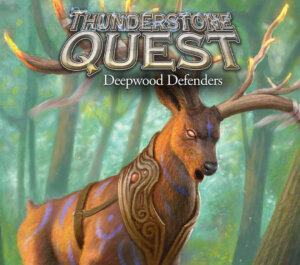 Yesterday AEG launched a new Kickstarter to bring a Thunderstone Quest Starter Set and two new adventures for the game to the masses. The quests, Nature’s Wrath and Rotten Roots, bring new challenges as well as over 650 new cards while the starter set promises a lower priced entry point into the game. You can reserve copies of the two new quests for a $55.00 pledge and grab the new lower priced entry into Thunderstone Quest for a $50.00 pledge through May 27th. Expected delivery is May of next year.

Nature’s Wrath – Quest #12 – Radical trolls in the Deepwood seek to tear Thunderstone Keep and the surrounding area to the ground in a war that could mean the end of civilization as we know it.

Rotten Roots – Quest #13 – An evil force has infested the treant that watches over the Deepwood. To save it, you’ll need to shrink small enough to enter it and explore the world within. Can you find the source of this plague and put an end to it in time?

This new Starter Set replaces the Adventurer and Champion Rewards from previous Kickstarters, and the Retail Base Game that has been available to brick & mortar stores in the past.

The box provides space for storage for its components and Quest 1; other Quests are designed to be stored in their own boxes; or you can purchase Superdeluxe boxes ala carte in the Pledge Manager after the campaign for consolidated storage.