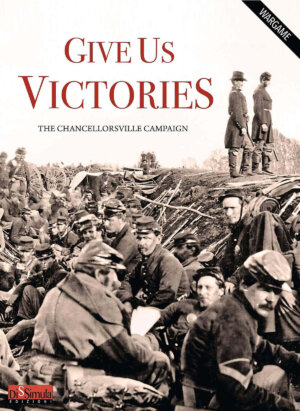 Dissimula Edizioni is currently in the midst of a crowdfunding campaign for a new American Civil War wargame designed by Sergio Schiavi. Give Us Victories features the Chancellorsville campaign beginning on April 30th, 1862 by way of a variety of scenarios. The game is for one or two players, ages 10+, and plays in two hours or more depending on the scenario. The project is fully funded and you can reserve a copy of the game, plus unlocked stretch goals, for a $75.00 pledge through April 25 with an expected delivery in January of next year.

GIVE US VICTORIES is a game about the Chancellorsville campaign, fought during the American Civil War, when 130,000 soldiers of the Union Northern Army clashed with the much smaller Northern Virginia Army, led by General Lee.

General Hooker, newly appointed by President Lincoln, was in command of the Army of the Potomac. Lincoln’s engagement letter ended with the words “Give Us Victories”.

Counters represent the fighting troops of each side in the campaign: cavalry and infantry brigades, artillery battalions, small units of skirmishers, pontoon bridges …

There are two complete sets in the box, with both silhouettes and NATO symbols, it allows players to choose what they prefer to play with.

The game is an improvement of the  Radetzky’s March system; the campaign begins on April 30, 1863, with the Army of the Potomac now beyond the Rappahannock and Rapidan, marching toward Chancellorsville. The game is of intermediate complexity and has simple and intuitive rules. The command system is the heart of the game: you simply check how many points you have in a turn, choose the formations to activate (divisions for the Confederates and corps for the Union), and put them in a cup. Your opponent does the same; then mix and pull…! Formations may move, attack, entrench, bombard and so on. Special rules cover the use of skirmishers, trench building, and bridge building. Players perform actions alternately with a random activation system always engaging and different, creating chaos and uncertainty, in a realistic and tense simulation.

The mechanic that drives the action in GIVE US VICTORIES advanced rules is the Event chit pull system. It adds variety and uncertainty to the game, as many unexpected events may happen…or not: Night attacks, Rebel yell, Steady defense, Stuart unleashed, Lost order and so on.