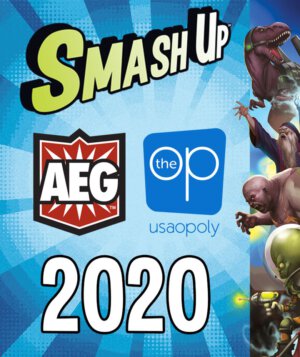 Fans of the hit shuffle building game Smash Up will be pleased to know AEG and The OP Games have entered into a partnership to bring licensed factions to the game beginning in 2020. No word on what licenses might be in the pipeline but as soon as more info becomes available you’ll see it here.

Alderac Entertainment Group (AEG), publishers of hit games like Tiny Towns and Ecos: First Continent along with The Op Games | usaopoly, the Carlsbad board game and puzzle publisher behind best-selling party games Telestrations and Blank Slate, are thrilled to announce their new partnership to bring officially licensed Factions to AEG’s flagship card game Smash Up in 2020 and beyond.

The award-winning “shufflebuilding” game allows fans to draft decks of fictitious dream teams and pit them against other campy collections in a battle to dominate targeted bases. Through ongoing play, players familiarize with and combine mechanics unique to each of their Factions to best their opponents’ point values.

In joining forces with The Op, who celebrates 25 years of co-branded products and partnerships this year, Smash Up designer Paul Peterson is confident that fans will embrace what is to come of the collaboration. “The Op has consistently put out some of the highest quality games in the industry,” says Peterson, known best for his work on Pokémon and Magic: The Gathering. “By pairing with the design team from AEG, the Smash Up game we are building together is going knock the fans’ socks off!”

This will be the first time both California board game companies have worked together to develop content for Smash Up. More will be revealed come AEG’s 2020 March Smashness and future events.