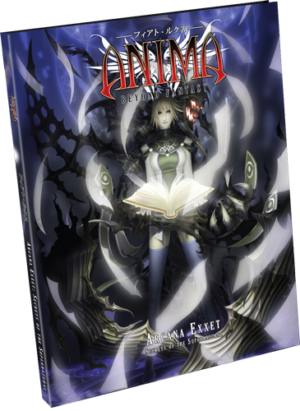 Fantasy Flight Games expands upon their critically acclaimed anime style RPG, Anima: Beyond Fantasy (which was developed in a cooperative endeavor with American and Japanese writers), with a look into the supernatural forces at work in the world of Gaïa, the vibrant fantasy realm of Anima. This new supplement is titled Arcana Exxet: Secrets of the Supernatural.

I am not a god…
Nor a demon…
I am greater than these concepts.
I am older than time.
Created by the will of the World.
I am… Magic.
And even the heavens will tremble.

Explore the nature and origin of magic in Arcana Exxet: Secrets of the Supernatural, the authoritative tome of the supernatural for Anima: Beyond Fantasy, the roleplaying game of dark fantasy!

Discover theorems of magic, metamagic advantages, invocations, psychic powers, and supernatural beings, including Sheele, spirits of the soul. While only those with the Gift can cast spells, Arcana Exxet provides rules for rituals that allow nearly anyone to harness magical powers. Learn about the invisible counterpart to the physical world and better understand the ultimate supernatural force of Gaïa by perusing books of magic, including grimoires full of powerful spells.