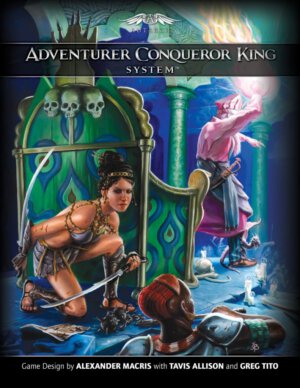 The role playing game, Adventurer Conqueror King System (otherwise known as ACKS), has been making a lot of waves in the RPG community and various web reviews are highly complimentary with what’s been released to this point. The system, from Autarch, is currently available in PDF and will soon be available in a high quality hardcover edition this March!

I’ll be very honest and point out I know virtually nothing about the Adventurer Conqueror King System but from what I have seen it looks like a quality product to say the least. Word is the system combines the best of the old school TSR D&D with many modern RPG flourishes such as in depth character customization.

I’ll look to find out more about ACKS but, in the meantime, check it out for yourself and take a peek at the hardcover preorder.

Your Journey from Adventurer to King Begins Now!

Enter a world where empires totter on the brink of war, and terrible monsters tear at the fragile borderlands of men; where decaying cities teem with chaos and corruption, nubile maidens are sacrificed to chthonic cults and nobles live in decadent pleasure on the toil of slaves; where heroes, wizards, and rogues risk everything in pursuit of glory, fortune, and power. This is a world where adventurers can become conquerors – and conquerors can become kings.

Will you survive the perils of war and dark magic to claim a throne? Or will you meet your fate in a forgotten ruin beyond the ken of men?

Whether you want to crawl through dungeons, trade with merchant caravans, run a merchant emporium, conquer an empire, or even raise an undead legion, ACKS supports your playstyle with simple, fast-playing game mechanics.

Future products will include: