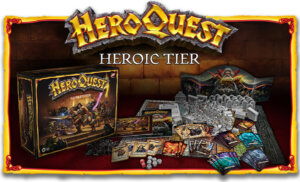 Gamers everywhere will be excited about the announcement today, from Hasbro and Avalon Hill, regarding the return of the classic HeroQuest board game. The game takes players on a fantasy dungeon delve as they work to defeat a variety of evil monsters. HeroQuest is being funded through the Hasbro Pulse crowdfunding platform and you can pledge for the Heroic Edition for $99.99 or the Mythic Edition, with the Return of the Witch Lord and Kellar’s Keep expansions, for a $149.00 pledge through November 6th, 2020. HeroQuest is for two to five players, ages 14+, and plays in around 90 minutes. No word yet on the expected delivery date.

Deep inside another dimension, face battling barbarians and evil magic on a quest for adventure in a maze of monsters. This is HeroQuest, the fantasy adventure game, where winning means mastering the art of combat and magic. Once you get into it, you’ll never be the same. 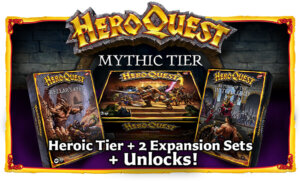 The Mythic Tier includes the Heroic Tier offer (featuring 71 highly detailed character and furniture miniatures as well as 4 bonus hero miniatures and 1 exclusive miniature only available during the HasLab campaign) as well as 2 game expansions, 2 more exclusive figures, and all available unlocks.

Do you dare to delve into the depths of Kellar’s Keep? Crawling with sinister monsters and menacing goblins…are you brave enough to make the journey? The first HeroQuest expansion features more miniatures for your collection as well as 10 new epic adventures to test the power of your heroes!

Return of the Witch Lord Expansion

The Witch Lord lives! His foul sorcery has protected him from the power of the Spirit Blade. You must move fast if you are to stop him from raising a legion of undead.