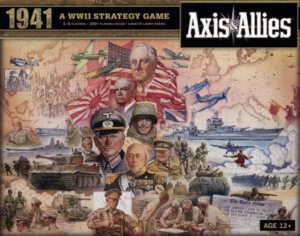 It’s been a while since Hasbro released a new Axis and Allies board game (2008) and it looks as if we’ll be seeing an introductory version of the venerable wargame soon. Axis and Allies 1941 is being solicited as “a simplified A&A experience that will introduce players to the A&A mechanics and play style.” This new title is aimed at faster setup and game play so the whole experience is expected to wrap up in 1.5 to 2 hours – a large difference than any A&A title I’m familiar with. How the gameplay will be streamlined is still a secret though.

The new release will also include sixteen all-new sculpts to keep first timers, and long time veterans, happy! These new scupts will include the P-40 Warhawk, Tiger Tank, AVRO Lancaster, FW-190, IS-2 tank, HMS Hood, He-111, the Akagi Aircraft Carrier, and more.

As a very nice surprise, Axis and Allies 1941 will carry an MSRP of only $30! This sounds like a steal with all the new minis and looks like it would be a great way to jump into the series!

No word just yet on an official release date.