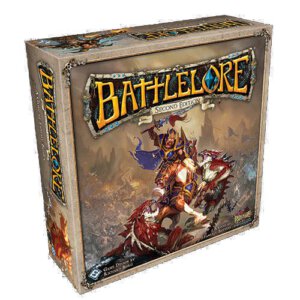 The hybrid board/miniatures game BattleLore is returning from Fantasy Flight Games with an all new second edition. Plenty of changes are in store for those familiar with the first edition with all new systems for movement and combat. The two player game is available right now and carries an MSRP of $79.95.

The Uthuk Y’llan hordes march out of the Ru Darklands into the realm of Terrinoth, spreading terror and death in their wake. Only one garrison of the Daqan Lords stands in the way of the coming onslaught. The bloodthirsty ferocity of the Uthuk Y’llan may be the ultimate test of the Daqan Lords’ cunning and military intelligence. As the invasion begins, you can finally put your own skills as a general to the test, because BattleLore Second Edition is now available at your local retailer!

After choosing scenario cards, you and your opponent muster an army, choosing from the units available to your faction. Once your army is mustered, you secretly deploy it, using decoys to hide the true location of your forces. When both sides have prepared, the armies are revealed, and the battle begins!

Every turn, you order units across the battlefield by playing a command card from your hand. The battlefield in BattleLore is divided into three sections – left, center, and right. Command cards generally order a specific number of units in one or more of these sections, allowing you to choose units to activate and move. Positioning units for attack or defense is vitally importantand keeping control of a choke point or a victory-point providing banner can give you a crippling advantage over your opponent.

Once your battle lines clash with your opponent’s, combat begins in earnest. Units in BattleLore engage in conflict by rolling a number of combat dice. Units cause damage, trigger special abilities, or force an enemy unit to retreat, based on the various die results. If an enemy survives your first attack and is still adjacent to your unit, however, it has the opportunity to counterattack, potentially destroying your attacking unit!

If the battle isn’t turning in your favor, however, not all hope is lost. Each faction has a lore deck, full of magical spells and cunning maneuvers that you can trigger by collecting and spending lore. Whether you use lore cards to blunt an enemy attack or punch a hole in your opponent’s formation, lore cards can be a boon to any general.

The units of the Daqan Lords differ greatly from the Uthuk Y’llan units, but every unit has key uses and options for controlling the battlefield, destroying your opponent’s plans, and seizing victory points. With units ranging from the terrifying Chaos Lord and deadly Flesh Ripper Brutes to a soaring Roc Warrior and the solid Citadel Guard, every unit in BattleLore fills an important role in your army.