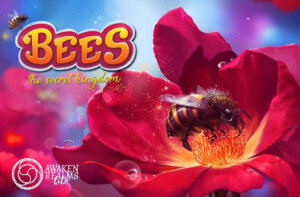 Van Ryder Games has a new family friendly game arriving this November. In Bees: The Secret Kingdom, players will juggle both making honey and creating flowers to generate pollen. The game is for two to six players, ages 8+, plays in around 10-30 minutes, and will carry an MSRP of $24.99.

Bees: The Secret Kingdom is family game based on the topic of Bees. In the game players will chose between creating a honey card, or play a flower card to get pollen tokens. This simple game has 2 modes, first one for families and younger players and, second, an advanced one for adults.

The basic rules are really simple: Players can draw two Gathering cards and play one of them to collect resources or make Honey by spending their gathered resources that match an available Honey card. Playing Gathering cards grants all the players acrylic gem resource tokens, but the player who played the card gains the greatest benefit. Players will race to match their resources to score points by making Honey, and the player who has the most points at the end of the game wins.