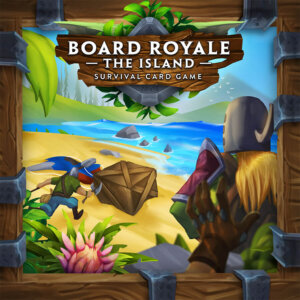 Following a successful Kickstarter, the battle royale card game Board Royale: The Island has arrived from Arvis Games. Players take on roles of survivors on a deserted island where only one can come out on top. The game looks to have its tongue firmly in cheek. Board Royale is for two to six playerss, ages 13+, plays in 30 to 60 minutes, and carries an MSRP of $28.00.

You and your friends stranded on a deserted island and the last one standing wins the game. Resource management is the key for survival apart from the attack and defence abilities, diplomacy and trade skills and backstabbing in a blink of an eye.

The game can be won in two different ways; either by eliminating every other player by depleting their resource cards or by crafting ten points worth of survival items to escape and win the game instantly. You gather resources in the beginning of your turn and use them to craft items that you can use to attack your friends, defend yourself, gather more resources or escape the island.

In this island being a great shooter is not sufficient. You need to make deals, trade with each other, build short-term alliances and betray your best friends before they do. Convincing others to attack anybody but you is a key factor for survival.

Board Royale is extremely easy to learn. The main mechanics can be learned in seconds and can be played with anybody instantly.

Board Royale is designed to have high replayability thanks to the high diversity in the item abilities and major impact of player personalities, playing types and social skills.

Board Royale has already 4 different expansion packs that each one add a completely different theme and depth that experienced board gamers seek.

Board Royale is made for competitive players and definitely not a peaceful game.