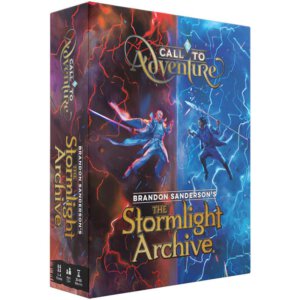 A standalone expansion, based on Brandon Sanderson’s The Stormlight Archive fantasy series, is on the horizon for Call to Adventure – check out my review of CtA. The RPG-like card game, from Brotherwise Games, seems like it would be a perfect fit for the crossover into tabletop. Call to Adventure: The Stormlight Archive is for one to four players, ages 13+, plays in 30 to 60 minutes, and will carry an MSRP of $39.99 when it arrives June 24th.

Choose your path, craft your hero, and unite the Radiants! In a world torn by storms and war, only the Knights Radiant can face the wrath of Odium! This is the official board game of The Stormlight Archive, Brandon Sanderson’s epic fantasy series. Using the Call to Adventure game system, it challenges you to build original characters in the world of Roshar.

Over the course of the game, you will acquire Traits, gain Allies, and overcome Challenges. Play competitively, solo, or cooperatively…and win or lose, every game creates a unique story! Call to Adventure: The Stormlight Archive can be played standalone or shuffled together with the Call to Adventure base game.

Call to Adventure: The Stormlight Archive is a 120 card standalone game containing everything you need to play. Based on the works of Brandon Sanderson, this expansion, and others to follow, add new challenges, new destinies, and new paths to follow.

Call to Adventure is a hero-crafting game that combines strategy and storytelling. It’s similar to some “tableau-building” games where you’re creating a kingdom or civilization, but in this game you’re building a character. Each player begins with cards that define your hero’s origin, motivation, and destiny. Over the course of the game, you overcome challenges and gain traits. It’s a game with points and a clear winner, but the highlight of every game is telling your hero’s story at the end.